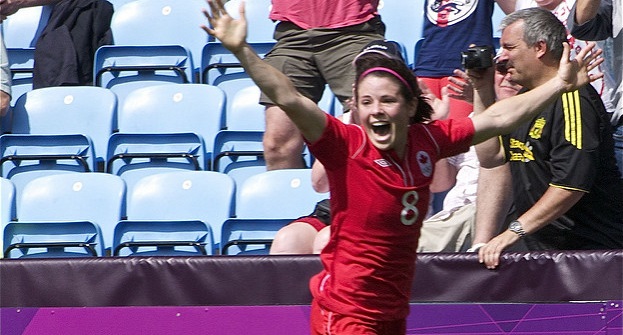 Canada’s Women’s National Team will continue Olympic preparations with a friendly match against France in Auxerre on 23 July, prior to flying into Brazil for the 2016 Rio Olympic Games.

These two teams have a rivalry dating back many years, but it is the bronze medal match in Coventry Stadium at the 2012 London Olympics that remains the most memorable, when Diana Matheson scored a goal in extra-time to earn Canada its first team medal at the summer Olympics since 1936.

Canada and France have faced each other 11 times since 1995, with a very competitive 4-3-4 history.

“We have had some great experiences against France in recent times, and felt we needed a true Tier 1 test before playing the Asian Champions in our opening match at the Olympics,” said head coach John Herdman. “France have an array of attacking talent that will pose interesting challenges for our players to solve, but at the same time we are hoping to see how far we’ve come since our last match in 2015.”

Fans can expect a challenging match for both teams as each prepares to go into tough Olympic group stages in Rio. Canada will open against Australia (Aug. 3) and Zimbabwe (Aug. 6) in Sao Paulo before moving to Brasilia for their group finale against Germany (Aug. 9), while France will go on to play Columbia in their first match, before facing defending gold medallists, USA, and finally New Zealand.

Additional information on match coverage will become available closer to the match date.

The friendly match against France will follow two home matches in the province of Ontario: 4 June in Toronto and 7 June in Ottawa. Both matches in this Road to Rio Women’s International Series will feature Canada against Brazil, the hosts of this summer’s Rio 2016 Olympic Games.

Tickets to Canada Soccer’s Road to Rio International Series are available via CanadaSoccer.com/Tickets.