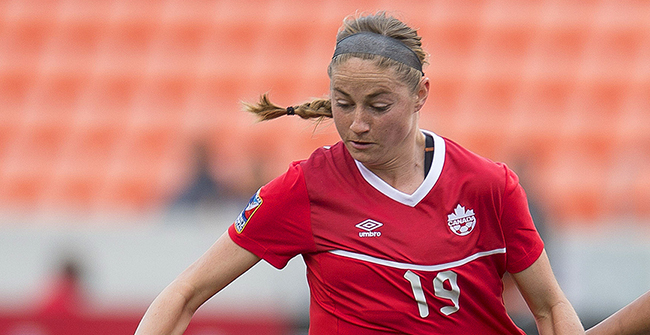 Canada has made the final of the Algarve Cup for the first time in the team’s history, after beating Iceland 1-0 in Lagos, Portugal. Canada and Iceland finished group play with six points each, but with head to head competition as the tiebreaker, Canada was able to edge out the Icelanders by dominating and ultimately winning the final group match between the two sides.

Janine Beckie scored the winning goal in the 41st minute after receiving a perfectly placed pass from Captain Christine Sinclair off a combination play with Sophie Schmidt.

“It was a great combination on top of the box, those two (Sinclair and Schmidt) just doing what they do and making it look easy, and then Sinc playing the perfect ball, it was an easy finish for me because of the set up,” said Beckie after the match. “I feel great, we didn’t know until after the game that we made it to the final, so it’s just another goal that’s achieved and I am glad that I was able to help the team get there.”

Canada held possession, and forced the Iceland team to chase them down throughout much of the game.

“I thought we dominated the game and it was a good performance,” said Head Coach John Herdman.  “The Icelandic team play a very direct style and against 30 km per hour wind in the first half, we told the girls that it was going to be about trying to live in Iceland’s half and I think they did that and they got a wonderful goal, just one of the best goals I’ve seen Canada score”

“I think we just really took advantage of playing on the ground and playing our game against a team that doesn’t really want to play with us,” added Beckie.

Coach Herdman has played a different line up each game, continually testing the team and the player combinations as he prepares for the final stretch towards this summer’s Olympic Games. All three of the goalkeepers on the roster have started, giving both Kailen Sheridan and Sabrina D’Angelo their first Women’s National Team appearances.

Winning Group A and making the final will give Canada another chance to play Brazil since they last met twice in December 2015 at the International Tournament of Natal. The Rio Olympic hosts have gone unbeaten throughout the tournament and should prove to be the toughest team Canada will face at the Algarve Cup.

“We came here to get to the final, we’ve tested a lot of players which has been wonderful, so our next task is to try and bring the Algarve Cup home for the first time,” said Herdman. “Brazil are a class team, they’ve blown the opposition away here and I think they’re absolutely lethal, but we’ve still got to test this squad out, we came here with some purpose to look at some players and put them in the tougher matches, we did that against Denmark, and we’ll do it again against Brazil, just to see who can cope with what.”
Canada will play in the final match of the Algarve Cup on 9 March against Brazil.

“It’s a one day turn around, so the players will be challenged,” said Herdman. “It’s a final, so it’s all out.”