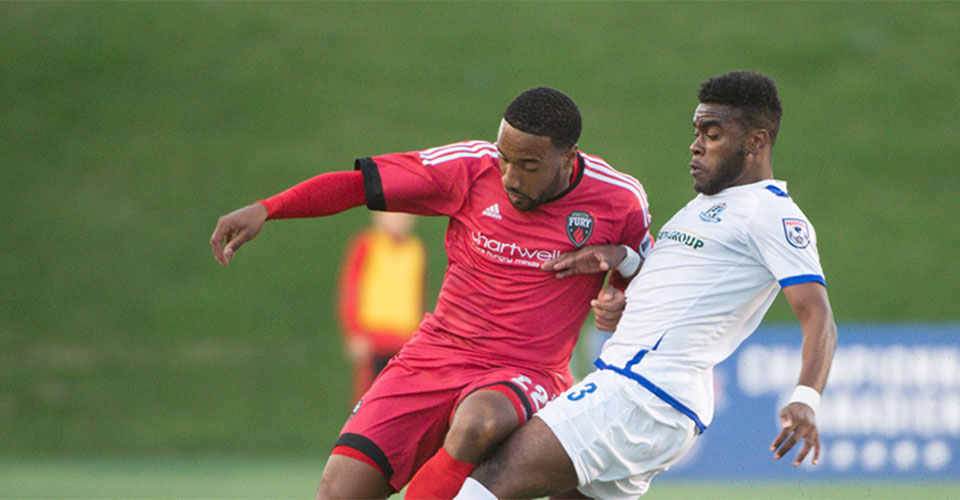 Canadian Championship: Ottawa wins 1-0 over Edmonton in first of two match qualifying round

The 10th edition of the Canadian Championship kicked off in Ottawa with hosts Fury FC defeating FC Edmonton in the first of two matches in a head-to-head elimination series to determine who will take on Toronto FC in the Semi-final. Ottawa Fury FC now head to Edmonton with a 1-0 series lead ahead of the second leg of the series on 10 May at Clarke Field.

Canadian goalkeeper Callum Irving was the star of the match with a trio of key saves, one point blank on Edmonton’s Canadian midfielder Allan Zebie in the 59th minute. Irving’s performance set the scene for goalscorer Ryan Williams to deliver the late heroics in the 89th minute.

“It was just a reaction (save),” said Irving. “We knew it was going to be a battle. These two teams have played each other quite a few times and this being a Canadian Championship match, there was a lot of pride on the line and a lot at stake. I think we both came into it willing to fight for the first leg and I expected nothing less from Edmonton or our guys with Ottawa. I am just happy we were able to turn that battle into a 1-0 win.”

“We have a home match next week and all our focus is on that match,” said FC Edmonton captain and Canadian midfielder Nik Ledgerwood. “It’s a great little rivalry we have (with Ottawa) even if we are not close in distance, but the rivalry has been built up over the years. These rivalries bring fans out and help showcase Canadian talent.”

“When there are kids watching the Canadian Championship and they see Canadians playing in it, I think it only does well for Canadian development as they have (a competition) in which they hope to play one day,” said Irving. “The more Canadian players you can get on the field for these matches, then all the better. It was nice to have my first Canadian Championship match (tonight) as I have grown up watching this competition. I hope it is the first match of many.”

What’s at stake when the Canadian Championship kicks off tonight? Only Canadian path to the @FIFAcom #ClubWC #CanChamp pic.twitter.com/v57Jdb7Jn5

The path to the FIFA Club World Cup will start at home with the Qualifying Round, whose winner will join Canada’s three MLS teams for home and away Semi-final series. The home and away Final round will culminate with the final match on 27 June where the winner will be crowned 2017 Canadian Champion and raise the Voyageurs Cup. A special one-match Battle of the North playoff between the 2016 Canadian Championships winners Toronto FC and the 2017 winners will be played on 9 August in Toronto to determine who will advance, unless Toronto FC repeats as Canadian winners.