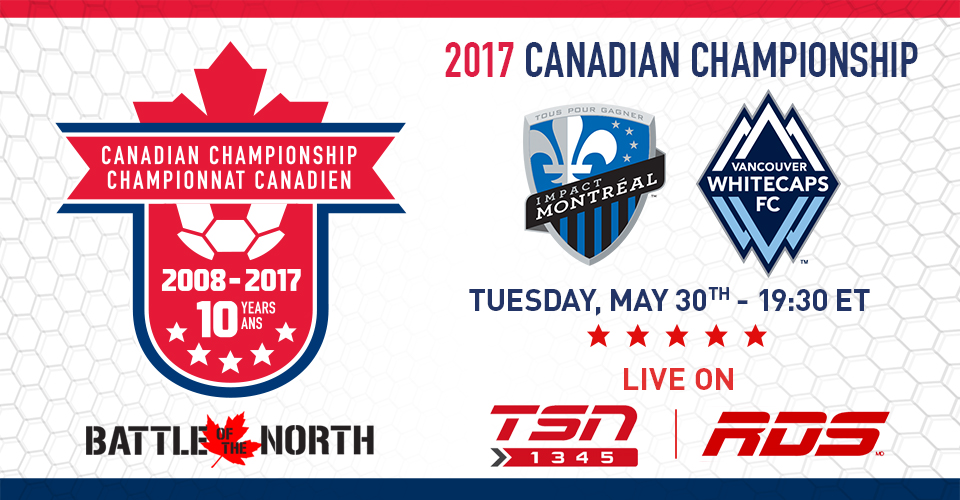 Vancouver Whitecaps FC have taken a 2-1 series lead with a home win in the 2017 Canadian Championship semi-finals opening leg. The Whitecaps scored twice in the first half before Impact Montréal FC cut the series lead in the second half.

Vancouver are now undefeated across 11 consecutive home matches in the Canadian Championship since 2011 (seven wins and four losses). Both sides now travel east to play at Stade Saputo in the return leg on Tuesday 30 May.

Vancouver opened in the 13th minute from a Brek Shea cross from the right side. Nicolas Mezquida smartly stepped over the low cross, letting the ball through to Alphonso Davies who fired it into the back of the net. At just 16 years old, Davies became the youngest goalscorer in the history of the Canadian Championship.

In the 33rd minute, Vancouver doubled their lead after some nice work by Davies heading to the edge of the box. Davies was stopped by Montréal midfielder Hernan Bernardello, but the loose ball was quickly picked up and fired on goal by Mezquida for the 2-0 lead.

In the 62nd minute, Montréal cut the lead in half on the Choinière goal. Daniel Lovitz played the ball forward and Anthony Jackson-Hamel flicked it forward with a header; Choinière then smashed it into the back of the net.

In the 68th minute, Montréal nearly equalised on a Chris Duvall shot that hit the post. Then in the 73rd minute, a Bernier penalty attempt was saved by the Whitecaps goalkeeper Spencer Richey. Bernier was close again in the final minute, but his shot at the back post was saved by Richey on the line.