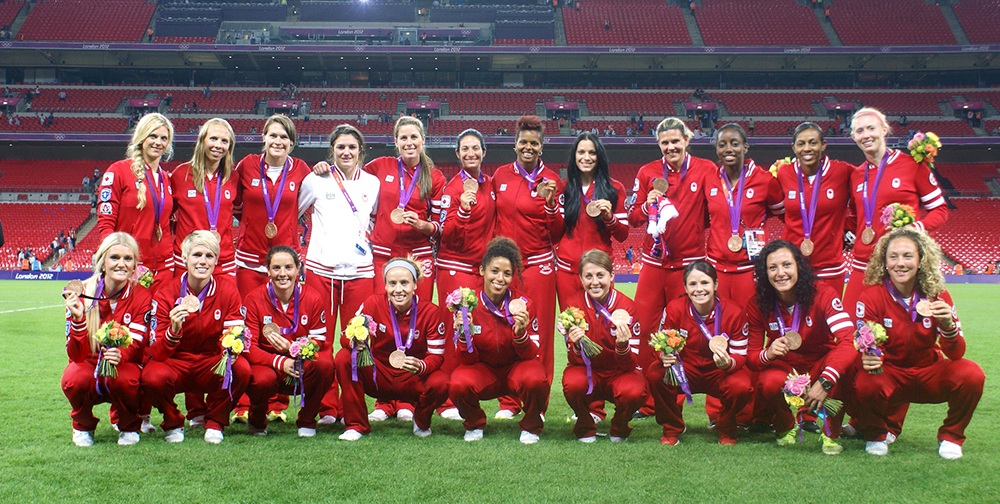 Canada Soccer’s Women’s National Team that won bronze at the London 2012 Women’s Olympic Football Tournament has been honoured by the Canadian Olympic Hall of Fame in the Team Category as part of the Class of 2019. That London 2012 team won Canada’s first medal in a Summer Olympic Games team sport since 1936.

“The London 2012 Olympic team has gone down in history as a watershed moment for women’s soccer in Canada,” said Steven Reed, Canada Soccer President. “Canada Soccer congratulates the players and the staff from this remarkable team that made history in Canadian sport.”

This team…
Congrats to the Canada Soccer’s London 2012 Women’s National Team who was honoured today by the Canadian Olympic Hall of Fame! #CANWNT pic.twitter.com/SHtd4sAIJ6

The most memorable moment to Canada’s London 2012 performance was Diana Matheson’s last-minute winning goal against France in the bronze medal match, a 1:0 victory that ensured Canada’s place on the podium. Along the journey, captain Christine Sinclair scored a semi-final hat trick against rivals USA at Manchester’s Old Trafford as she finished first in tournament goalscoring.

On TSN alone, that Canada-USA semi-final drew a record average audience of 2.4 million viewers, making it the most watched Summer Olympic Games event ever on the Canadian network.

In the group phase, Canada lost 1:2 to Japan, won 3:0 over South Africa, then drew 2:2 with Sweden. In the knock-out phase, Canada won 2:0 over Great Britain, lost 3:4 after extra time to USA, then won 1:0 over France. From six matches, Canada’s goalscorers were Sinclair (six), Melissa Tancredi (four), Jonelle Filigno, and Matheson. Both goalkeepers Erin McLeod (two) and Karina LeBlanc (one) posted clean sheets during the tournament. In order, Canada’s six players of the match were Tancredi, Robyn Gayle, Desiree Scott, Filigno, Sinclair, and McLeod.

At the end of 2012, coaches and captains from the top 24 nations in the world voted Sinclair as the second-best player in the world. In Canada, she was named Canada Soccer’s Canadian Player of the Year (she scored a record 23 goals in 22 international matches) as well as the Toronto Star’s Lou Marsh Memorial Trophy winner and Canadian Press’ Bobbie Rosenfeld Award winner.