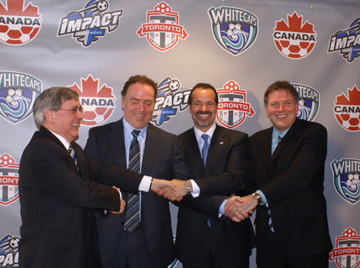 The Canadian Soccer Association is pleased to announce a new six-match competition between three professional clubs to determine Canada’s 2008-09 entry in the new CONCACAF Champions League. Vancouver Whitecaps FC, Toronto FC and the Impact de Montréal will all play in a home-and-away round-robin tournament from May to July 2008. The winner will advance to the opening round of the inaugural 2008-09 season of CONCACAF Champions League. All three teams will play four games – two at home and two on the road. There will be three points awarded for a win and one point awarded for a draw. In case two teams are tied on points after four matches, the winner will be decided first by goal differential, then if necessary by most goals scored, then if necessary by most away goals, then if necessary by the drawing of lots.

The Canadian Soccer Association is pleased to announce a new six-match competition between three professional clubs to determine Canada’s 2008-09 entry in the new CONCACAF Champions League. Vancouver Whitecaps FC, Toronto FC and the Impact de Montréal will all play in a home-and-away round-robin tournament from May to July 2008. The winner will advance to the opening round of the inaugural 2008-09 season of CONCACAF Champions League.

The realization of a Canadian club represented at the CONCACAF Champions League is a huge step in the evolution of professional soccer in Canada, says Vancouver Whitecaps FC president Bob Lenarduzzi. Canada’s three professional clubs have never been stronger both on and off the field. This tournament will showcase the growth of the sport in Canada’s three biggest markets. It’s a great time to be a fan of the professional game in Canada.

Toronto FC is excited to compete in a national tournament that challenges our players and gives them an opportunity to develop their game at a another level, said Tom Anselmi, executive vice-president and chief operating officer of Maple Leaf Sports & Entertainment and Governor of Major League Soccer. More importantly competitions such as this Canadian Qualification tournament support our goal of motivating the next generation of Canada’s soccer talent and show them that they have professional soccer teams to aspire too.

We are very excited as a club to participate in an event that will showcase soccer locally, nationally and internationally, says Joey Saputo, President of the Impact de Montréal and the Stade Saputo. All three clubs have made great achievements in their respective local markets, but this is a unique opportunity to further promote the game of soccer throughout the country. Also, I truly want to underline the great spirit of cooperation that has surrounded this project since the clubs first initiated their discussions last October. When natural rivals such as Vancouver, Toronto and Montréal put their differences aside and come together for the good of the game, you know something exciting is going to happen.

Sixteen of the 24 clubs – including Canada’s entry – will take part in a preliminary home-and-away series in late August and early September. The preliminary round winners will join the other eight seeded teams in the group stage which will consist of four groups of four. All the teams in each group will play each other in a round-robin system during six match dates (three home games, three away games) from 16 September to 30 October.

The top two clubs from each group will advance to the knock out phase and play a home-and-away elimination. The quarterfinals commence in February 2009, with the semifinals to begin in March, and the Final to take place in late April.

The CONCACAF Champions League winner will qualify as the CONCACAF’s representative to the 2009 edition of the FIFA Club World Cup.