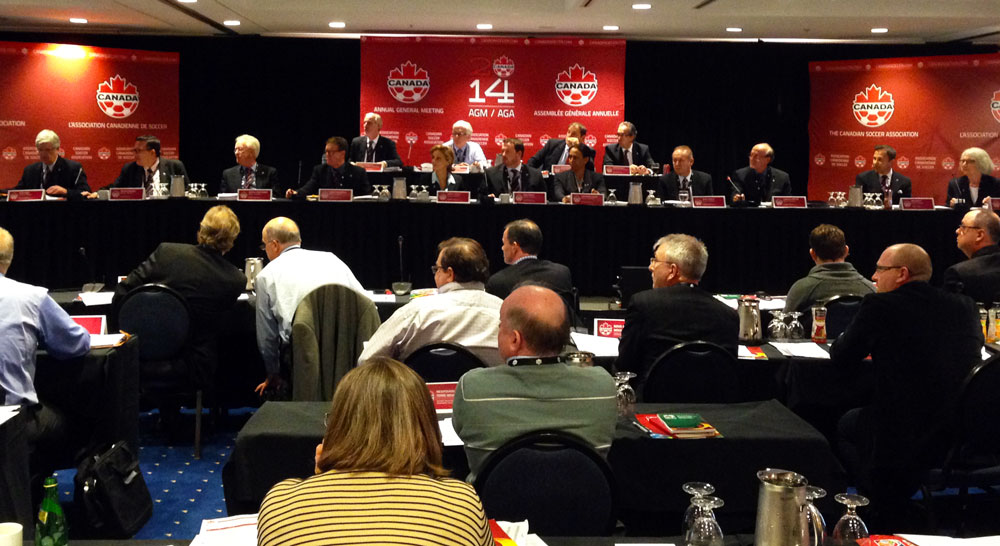 In what is one of its biggest annual reoccurring event, the Canadian Soccer Association convened its membership for its Annual General Meeting weekend from 8-12 May 2014 in Vancouver, BC.

In what is one of its biggest annual reoccurring event, the Canadian Soccer Association convened its membership for its Annual General Meeting weekend from 8-12 May 2014 in Vancouver, BC. In addition to the Board of Director elections and Annual Banquet, the weekend provides representatives from Provincial/Territorial Member Associations with a chance to participate in workshops on topics spanning from governance to strategic planning and technical programming to risk management.

As part of the Annual General Meeting on Saturday, the membership proceeded with the election of two directors and a Vice-President to its Board of Directors.

The Canadian Soccer Association Board of Directors is composed of eleven Directors and two Officers (Vice-President and President).

The Annual General Meeting concluded with the 2014 Annual Banquet of the Canadian Soccer Association, hosted by BC Soccer. The Annual Banquet marks the celebration of Canadian soccer and the achievements of its participants over the previous year. The 2014 edition honoured five recipients with Awards.

The Award of Merit was handed out to three individuals who have made a significant contribution to the sport of soccer in Canada in the areas of promotion, growth and development for no less than a period of ten years.

Respected for his wealth of knowledge and his dedication to the growth and development of the game, Don Dancey, recipient of a 2014 Award of Merit, has become a leader in the area of Provincial and National Club Championships.

The third recipient of a 2014 Award of Merit, Leeta Sokalski, is considered a soccer legend in British Columbia for the role she played as player, coach, referee, administrator and pioneer.

The 2014 Ray Morgan Award, presented to the referee whose performance at the national and international level is the most deserving of recognition for the year, was presented to Marie-Soleil Beaudoin. In her first assignment to a CONCACAF competition, she was appointed to the final at the 2013 CONCACAF Boys Under-15 Championship, inspiring a new generation of up and coming referees.

The last honour of the evening, the Aubrey Sanford Meritorious Service Award for outstanding overall contribution to soccer presented by President Victor Montagliani, was bestowed on a faithful servant of the game, Dr. Edward Johnson, who served as team physician for over 30 years.

The Canadian Soccer Association’s 2013 Annual Report is now available for download on canadasccer.com.