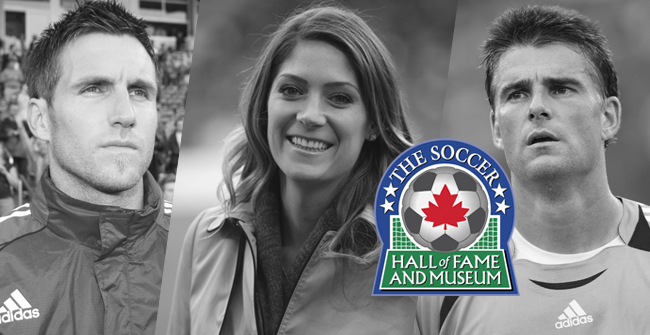 Induction Ceremony will take place in Vaughan, Ontario on November 8

The Canadian Soccer Hall of Fame is pleased to welcome the inductees of the Class of 2015, which includes: three Players, two Builders, a Pioneer, an Organization of Distinction and a Team of Distinction.

The Canadian Women’s CONCACAF Championship winning team of 1998 enters the Hall of Fame as this year’s Team of Distinction. Canada won the 1998 CONCACAF Women’s Championship by beating Mexico 1-0 at Centennial Stadium in Etobicoke. Canada had beaten Puerto Rico, Martinique, Guatemala and Costa Rica to get to the final that year. It is considered one of the greatest achievements by the women’s program.

Jim Brennan, Kara Lang and Pat Onstad enter the Hall of Fame in this year’s Player category. Brennan, who played 49 times for Canada, was a part of the CONCACAF Gold Cup winning team in 2000. He played for top clubs in England prior to joining the newly formed Toronto FC as the team captain. Lang, who played 92 times for Canada and scored 35 goals, holds the distinction of being the youngest player to play in a senior women’s international for her country, as well as the youngest player to score a goal in a senior women’s international. Onstad, who played 58 times for Canada, was a member of the Canadian World Cup squad in 1986. He won the Canadian Soccer League championship in 1992, became the A-League Goalkeeper of the Year in 1998, before having a lengthy, successful career in Major League Soccer.

In the Builder Category, John Kerr and Jim Hubay have been selected as part of the 2015 Induction Class. Hubay has a long history of involvement in youth soccer in Canada. He helped to create the Quebec Minor Soccer Association, as well as the Canadian Minor Soccer Association, for which he would eventually hold the titles of president, vice-president, and treasurer. The late Kerr was instrumental in organizing and leading the North American Soccer League Player Union in the years of the league’s operation. As a player, he played 10 times for Canada.

George Anderson has been selected as Pioneer in the 2015 Induction Class. Anderson toured Australia with the Canadian team in 1924 and played in all six internationals. Anderson was a member of the Upper Island and Pacific Coast League, when they took on the touring English FA team in 1926. He would win the Challenge Trophy in 1928, 1930 and 1936.

Finally, Montreal Carsteel has been selected as an Organization of Distinction as part of the 2015 Induction Class. Carsteel were one of the great Canadian teams before and just after World War Two. Carsteel won the Quebec Cup for the first time in 1925, and would win it eight more times in the next 15 years. During that time, they won the Eastern Division of the National Soccer League four times and the National Soccer League championship twice.

Ticket details for the night will be released soon.

About the Canadian Soccer Hall of Fame and Museum:

The Canadian Soccer Hall of Fame and Museum was created to acquire, document, preserve, display and interpret artifacts and archival materials that tell the story of the development and continuing history of soccer in Canada. The Museum was opened in Vaughan at The Soccer Centre in 2000 and is operated by the Ontario Soccer Association.