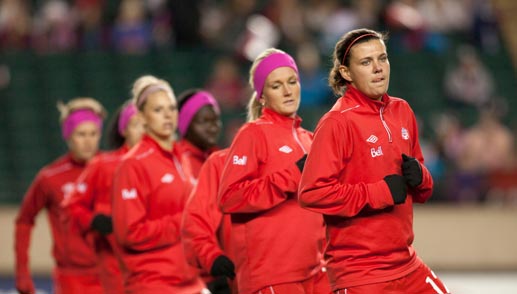 Canadians return as team prepares for rematch at BC Place

The upcoming match marks Canada’s return to BC Place, which in less than two years will host the final to the FIFA Women’s World Cup Canada 2015.

Canadian coach John Herdman has his team back in Vancouver, preparing for a Women’s International Friendly at BC Place this coming 24 November against CONCACAF rival Mexico. The fixture represents somewhat of a rematch some 21 months after the two battled for a spot at the London 2012 Olympics.

Canada won the 2012 qualifier in front a packed home crowd, booking its spot for the London Olympics where it would win bronze and become heroes from coast to coast across the nation. The upcoming match marks Canada’s return to BC Place, which in less than two years will host the final to the FIFA Women’s World Cup Canada 2015.

Two players that missed the 2012 journey but are back in Canadian colours are strikers Josée Bélanger and Kara Lang, both back from injury for the first time this month in a centralised camp in Vancouver.

Bélanger and Lang were key players in the Canadian team that won the 2010 CONCACAF Women’s Championship, but then missed the FIFA Women’s World Cup in Germany just eight months later.

Just 24 years young when they pulled out, they are both now 27 with their minds set on a comeback as the Canadian program prepares to host the FIFA Women’s World Cup Canada 2015™.

Bélanger suffered an ankle injury and needed more than half a year before returning to club action in her hometown Sherbrooke, QC, albeit staying away from the national program for another two years. Coach Herdman has been anxious to bring her back in the program and is happy she answered the call ahead of the Mexico clash.

Lang, meanwhile, called it a ‘career’ because of recurring knee injuries, turning to a new career in broadcast television in January 2011 (which would include on-field media coverage of the 2012 qualifiers). She only started working on a comeback earlier this year, rebuilding herself physically outside the team environment with B2Ten. She has now just been reintegrated back into the Canadian program for more football-specific work in her recovery, with an expected return to full training in the new year.

“It is very exciting to have Josée Bélanger back on the team,” said coach Herdman. “I have been pestering her for a couple of years. She’s here now to prepare for the upcoming game against Mexico.

“Having Kara Lang back (playing football) would also strengthen that forward space. They both have a history of scoring important goals for Canada.”

By re-activating her career, Lang is again Canada’s second all-time active goal scorer, with 34 goals in 92 international matches. She played in two FIFA Women’s World Cups, helping Canada finish fourth at USA 2003 (even scoring the opening goal of a 1:2 loss to Sweden in the match for third place).

Lang’s last international match was 5 November 2010 against Costa Rica, a 4:0 win that officially qualified Canada for the FIFA Women’s World Cup Germany 2011. Bélanger was actually the clutch scorer in that game, scoring the opening (and winning) goal against Costa Rica. She also had a goal and an assist three days earlier in a win against Mexico (in Mexico).

Bélanger would have been an easy selection to make her FIFA Women’s World Cup debut in Germany, but the injury postponed her international career. In her last 10 matches with Canada in 2010, she was the team’s second-best scorer with five goals and one assist.

“There’s a real need for more goals, so we are constantly working on developing our pool of forwards,” said Herdman.

If stories remain on script, Bélanger and Lang could help fulfill that need. For the hosts of 2015, those comebacks are surely news well received.