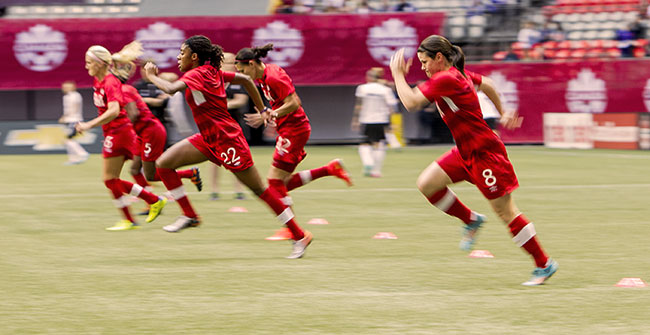 It’s been almost a year since Canada’s Women’s National Team last was on the field in Edmonton when they played Korea Republic in a women’s international friendly at Commonwealth Stadium.

As Canada prepared for that game, they braved frigid sub-zero temperatures but as the prepared for Saturday’s friendly against Japan, it was under much warmer conditions. The hope is that will continue into the weekend and those in attendance will get to see some great action between two of the best teams in the world.

“We’re in a (FIFA World Cup Canada 2015) host city, playing at home where we’ll be playing our first couple games and we’re playing against the reigning world champions,” said goalkeeper and Alberta native, Erin McLeod. “I think it’s kind of a dream game and it’s not snowing and we’re really excited.”

The last time these two teams met was in both nations’ opening matches at the 2012 Olympics in London when Japan came away as 2:1 winners.

The players are hoping they can give the fans something to cheer about, and more than that, give home fans further reason to come back out next summer to make Canada a hostile place to play as Canada pursues a World Cup on home soil.

“Hopefully we get a good crowd, a loud crowd,” said midfielder Diana Matheson. “We want to put out a performance that the crowd’s going to be excited by and that we can get them cheering all game long.”

Of course this is the first of two games that these two teams will play. The day after the game in Edmonton, it will be a quick flight to Vancouver when the teams will quickly turn over and prepare for Tuesday night when they take to the field at BC Place for an immediate rematch.