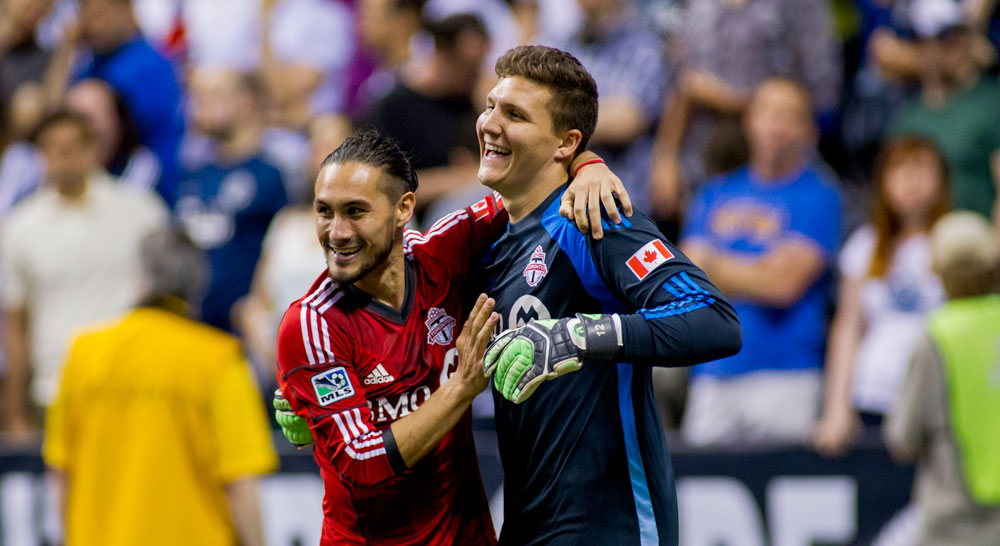 Vancouver Whitecaps FC were denied a berth in the Amway Canadian Championship final after suffering a heartbreaking 5-3 defeat on penalty kicks at the hands of Toronto FC Wednesday evening at BC Place.

Vancouver Whitecaps FC were denied a berth in the Amway Canadian Championship final after suffering a heartbreaking 5-3 defeat on penalty kicks at the hands of Toronto FC Wednesday evening at BC Place.

The thrilling second-leg showdown saw Whitecaps FC battle back from an early 1-0 deficit with goals from Erik Hurtado and Pedro Morales to claim a 2:1 win after 90 minutes. More importantly, that result leveled the aggregate score at 3-3, forcing extra time.

The 30 minutes of extra time solved nothing, however, so the series would be decided in a penalty shootout. All five of Toronto FC’s shooters found the back of the net, while Reds goalkeeper Joe Bendik played the role of hero with a save on Kekuta Manneh’s attempt.

It was a gutsy performance from the Blue and White, but in the end, the star-studded Reds advanced to the Canadian Championship final with a 4-3 aggregate win.

The ‘Caps opted to go with a youthful side again on Wednesday, as Whitecaps FC head coach Carl Robinson made just two changes from his starting lineup in the first leg.

Morales and Manneh both drew into the squad in place of Residency midfielders Marco Bustos and Kianz Froese, who are away with the Canadian U-20 national team.

Toronto FC, meanwhile, made five changes to their starting lineup. But they were once again anchored by Designated Player Michael Bradley. And the World Cup-bound midfielder helped the Reds get an important early goal.

In the fourth minute, Bradley played a straight ball into the box on a free kick and defender Nick Hagglund flicked it past an onrushing Carducci. Dean alertly headed Hagglund’s attempt off the goalline but defender Doneil Henry poked in the rebound to give Toronto a 1-0 lead.

The early goal meant that Vancouver would need to score at least twice to force extra time, or three times to win outright. And right on queue, the ‘Caps began to take control.

Vancouver dictated the pace of the game in the first half and created several chances, including a beautiful combination play between Morales and Nicolas Mezquida that led to a close-range Manneh attempt in the 18th minute.

Aside from the early goal, Toronto didn’t offer much of an attacking threat in the opening 45 minutes. Their only other real chance came in the 31st minute, when Bradley lined up for a 26-yard free kick.

But Carducci, who made four saves on the night, kept Whitecaps FC in the game with a diving stop to his right. And on the ensuing corner, Morales came up with a headed goalline clearance to keep the score 1-0.

That scoreline wouldn’t last much longer, however, as the ‘Caps got their equalizer just before halftime.

After Mitchell won a header off a Reds goalkick, the ball landed to Morales in midfield. The Chilean then chipped a perfect ball onto Hurtado, who finished first time from inside the box in the 43rd minute to level the score at 1-1.

Still down a goal on aggregate, the ‘Caps kept pushing forward after the break. Robinson’s side had the visiting Reds on their heels for much of the second half, including a five-minute spell before the 60-minute mark in which they had three corners.

The ‘Caps came close on several occasions, like in the 70th minute when Mezquida released Manneh down the left wing before Reds goalkeeper Jon Bendik came off his line and disrupted the play. Or in the 73rd minute, when a low Hurtado cross just eluded a sprawling Omar Salgado at the back post.

Finally, the ‘Caps were rewarded with an all-important second goal in the 86th minute. After Hurtado was hauled down in the box by Henry, Morales stepped up to the spot and calmly placed a penalty into the bottom left corner, tying the aggregate score at 3-3.

And they didn’t stop there. Vancouver had at least three more chances in the dying stages of the match, but the score remained 2-1 after 90 minutes, which resulted in 30 minutes of extra time.

The ‘Caps picked up where they left off in extra time, as their young legs appeared to give them an advantage. There were some scares at both ends in the first 15-minute period of extra time, but neither side managed to find the back of the net.

The second 15-minute period didn’t solve anything either, though Toronto hit the post and forced Carducci into tipping a heavy Daniel Lovitz strike just over the goal. In the end, despite outshooting Toronto 24-11 and controlling large parts of the game, the ‘Caps would suffer a heartbreaking defeat in a five-round penalty shootout.

Toronto FC now moves on the Amway Canadian Championship final, where they will meet fellow Eastern Conference side Montreal Impact.