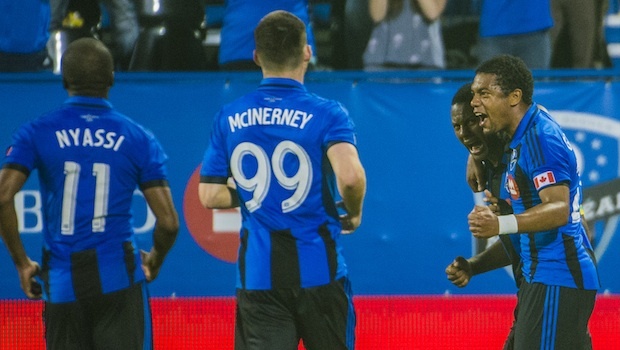 In a game in which midfielder Justin Mapp put on a show – setting up forward Jack McInerney for two goals – it was a 96th minute penalty kick by the Impact captain Patrice Bernier that sealed the bleu-blanc-noir’s spot in the Amway Canadian Championship final, topping the Eddies 4:2 on Wednesday and advancing on a 5-4 aggregate score.

Mapp, making one of his typical runs down the right flank in the 10th minute, played a cross through the box that found Jack Mac far post for his first of the game. Seven minutes later, Mapp back heeled Sanna Nyassi’s lateral pass at the top of the box to play Jack Mac through on goal for his second.

“Justin is a difference maker,” said head coach Frank Klopas. “He’s one of the best wingers for me in the league and I’m surprised that he hasn’t been recruited by the national team. He’s a dynamic player, which you don’t find a lot.”

It looked like the Impact would breeze into the final round of the Amway Canadian Championship after Jeb Brovsky scored a beautiful header into the far post that originated from a Hernan Bernardello corner kick to start the second half.

But despite dominating the game in most statistical categories, a three-minute stretch starting in the 67th minute put the Impact on its heels as FC Edmonton went ahead on aggregate goals, bringing the game to 3-2. Canadian striker Frank Jonke scored two of his own – the first from a through ball by fellow Canuck Hanson Boakai and the second off of a PK.

“The game should have been 5 or 6-0 for us, but we put ourselves in difficult moments through a lack of concentration” said head coach Frank Klopas. “Within three minutes of play, the game completely changed, when this game should have been over already. We had to find some way to come back and make some changes, which we did.”

With the Eddies in the driver seat, the Impact continued to press the game, looking for the series go-ahead goal. The result was a penalty call for a hand ball.

The Impact captain stepped up to the spot with the fate of his team resting on his shoulders and slotted home the series winning goal with almost no time left on the clock.

“Nervous? Never. Stressed? Yes,” said Bernier. “Usually I am never nervous taking penalties, but for the first time I felt something extra tonight.”

Montreal will travel to Toronto for the first leg of the Amway Canadian Championship final on 28 May, before hosting the return leg at Stade Saputo on 4 June.