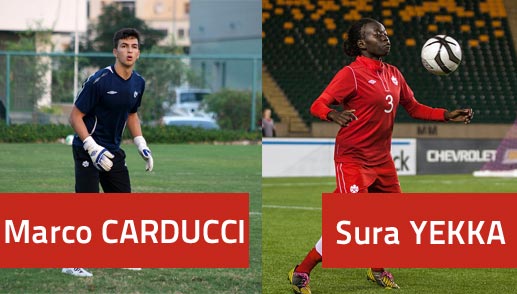 Carducci, Yekka named 2013 Canadian U-17 Players of the Year

Canadian teenagers Marco Carducci and Sura Yekka have been named Canadian U-17 Players of the Year for the 2013 soccer season. The two stars were honoured in a vote shared by national-team coaches (50%) and Canadian clubs and coaches (50%).

Carducci is a member of Canada’s Men’s U-17 Team and Vancouver Whitecaps FC Residency program. In 2013, he won a bronze medal with Canada at the CONCACAF Men’s Under-17 Championship, helping Canada qualify for the FIFA U-17 World Cup UAE 2013. He was Canada’s player of the match in a 2:2 draw with Austria in the tournament’s group opener.

Yekka is a member of Canada’s Women’s National Team program, having made her debut at the national “A” level on 31 October in Edmonton, AB. One month later, she earned Canada’s player of the match honours in her second match, a 0:0 draw with Mexico in Vancouver, BC. Also a club member of Brams United SC, Yekka was named to the Canada Games All-Star Team in August.

CANADIAN U-17 PLAYERS OF THE YEAR