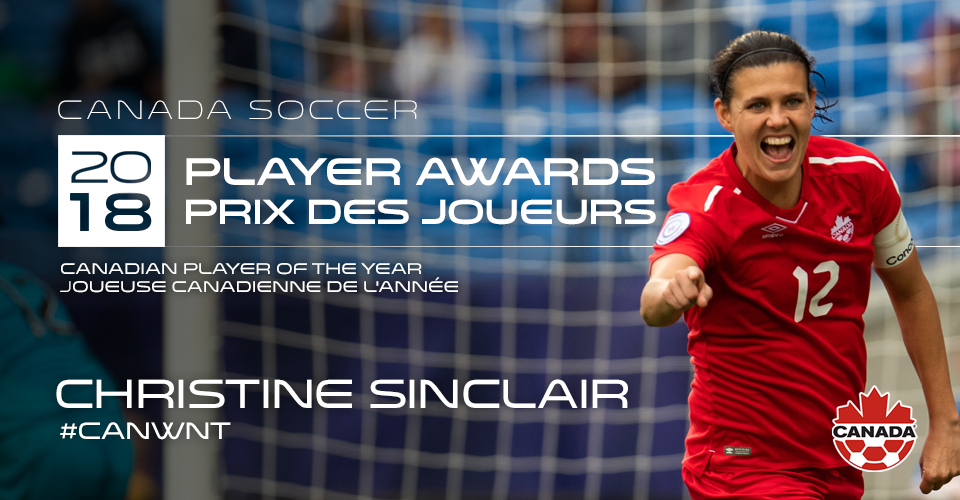 Christine Sinclair has been voted the Canadian Player of the Year in recognition of another successful season highlighted by scoring the winning goal that qualified Canada for the FIFA Women’s World Cup France 2019™. It was the nation’s most important goal of the year as Canada Soccer’s Women’s National Team qualified for the FIFA Women’s World Cup for a seventh consecutive time.

Sinclair from Burnaby, British Columbia was honoured from a vote shared by Canadian media and Canadian coaches.  She is one of two winners of the 2018 Canadian Players of the Year award. Her co-winner from the Men’s National Team will be announced on Wednesday 12 December.

“Christine Sinclair showed that you can continue to add layers to your performance, regardless of age, if you work hard,” said Kenneth Heiner-Møller, Canada Soccer’s Women’s National Team Head Coach. “Her great physical shape helped her play every minute for Portland Thorns FC and also led Canada to yet another FIFA Women’s World Cup™.”

“Her ability to lead her line as well as the players around her while at the same time performing at her level is simply remarkable and unique. Sinclair is a notorious goalscorer, but she should also get credit for her ability to set up goals. She is an important part of the build up play for both her club and our Women’s National Team.”

At the international level, she led Canada in goalscoring for the 15th time in 19 years, scoring eight goals and two assists in 12 international matches. She finished second on Canada with 979 minutes played as the Women’s National Team won eight of 12 matches, including a 7:0 win over Panama on 14 October to qualify for the FIFA Women’s World Cup France 2019™.

With a second-place finish at the Concacaf Women’s Championship, Sinclair collected her eighth Concacaf medal since 2002 (one gold, six silver, one bronze). With 177 international goals to her credit in all competitions, she is in second place just seven goals back of all-time leader Abby Wambach (184).

2018 Canada Soccer Player Awards
This marks the 26th edition of the Canada Soccer Player Awards, with the 2018 Canadian Players of the Year to be announced on 11 and 12 December. Amongst women’s footballers, Christine Sinclair finished first in voting ahead of runner up Kadeisha Buchanan, third-place Jessie Fleming, fourth-place Janine Beckie, and fifth-place Ashley Lawrence.