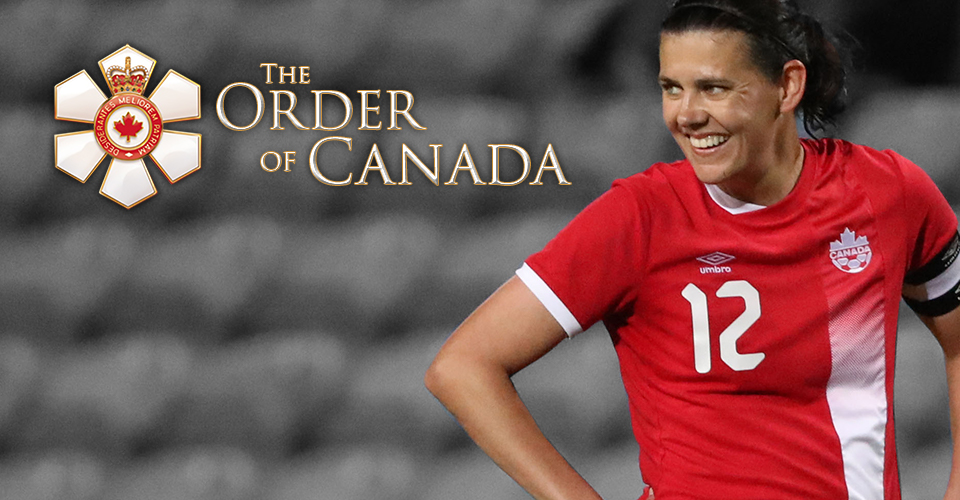 Canada Soccer congratulates Christine Sinclair on her appointment as an Officer of the Order of Canada. Having led Canada Soccer’s Women’s National Team to two Olympic Bronze Medals, the medal she will wear today has a very different significance for Canada’s Captain.
“I think what’s special for me is that this goes beyond soccer,” she said.   “I am a very, very proud Canadian, I am proud of where I am from, and to be recognized in this nature is surreal.  It’s not something you can dream about happening to you… I can dream of winning a World Cup or an Olympic Gold Medal, and that’s my job, but to have your country recognize you – I don’t even know what to say.”

Created in 1967, the Order of Canada, one of our country’s highest civilian honours, recognizes outstanding achievement, dedication to the community and service to the nation.

“On behalf of Canada Soccer, congratulations to Christine on this momentous achievement,” said Steven Reed, Canada Soccer President. “We’ve had the opportunity to watch Christine grow up and have been privileged to watch her become a Canadian icon and role model for all Canadians.  She is truly deserving of this honour.”
Sinclair has scored 168 goals in 259 appearances for Canada Soccer’s Women’s National Team over 17 years and was named Canada Soccer’s Player of the Year in 13 of those years.   She has led Canada to two Olympic Bronze Medals, a CONCACAF Championship victory, and countless international successes.  She is the second all-time top goal scorer in women’s football, and the top currently active in the international game.  A quiet, unassuming leader, Sinclair leads by example and sets the standard for players who don the maple leaf.
“There’s no one person that’s more deserving than Christine,” said Peter Montopoli, Canada Soccer General Secretary.  “For all that she’s done for the sport – and not only women’s soccer, but soccer in general.   We see it in every match we hold here in Canada, she’s the inspirational leader on and off the field.  She’s been a tremendous inspiration, a role model for Canadians, and this will continue long after she’s finished playing, given what she has contributed to our country, for sport, and for women’s soccer.”
A remarkable Canadian on and off the pitch, Sinclair is known for her steady determination and reliability as Canada’s talisman.
“Everything she does is about playing for her country,” said Head Coach John Herdman.  “Every single day the decisions she makes about her football career and around her personal life, are about pulling on that red jersey.  When someone gets that opportunity they either treat it as their sport, or as a calling, and I think Christine over the last eight years, and certainly over the time I’ve known her, has recognised that this is her calling to be part of something special – a team, a game – that transcends a soccer field.”
In a sport that is played by more people than any other, both in Canada and around the world, Sinclair stands at the top of the women’s game as both a symbol of Canada and women’s sport.  The Order of Canada is an honour that she will surely take with the humble grace that is her trademark, but as she receives the highest of Canadian honours her contribution is celebrated by her Canada Soccer family and her many fans around the world.
“When you look at this game, it’s truly the world’s game,” said Montopoli.  “Over one hundred countries participate in women’s international soccer, and yet off all those players, over the past 20 years, Christine stands at the top of as one of the best there has ever been and that’s a testament to who she is and what she’s given to the sport in our country, and the world.”