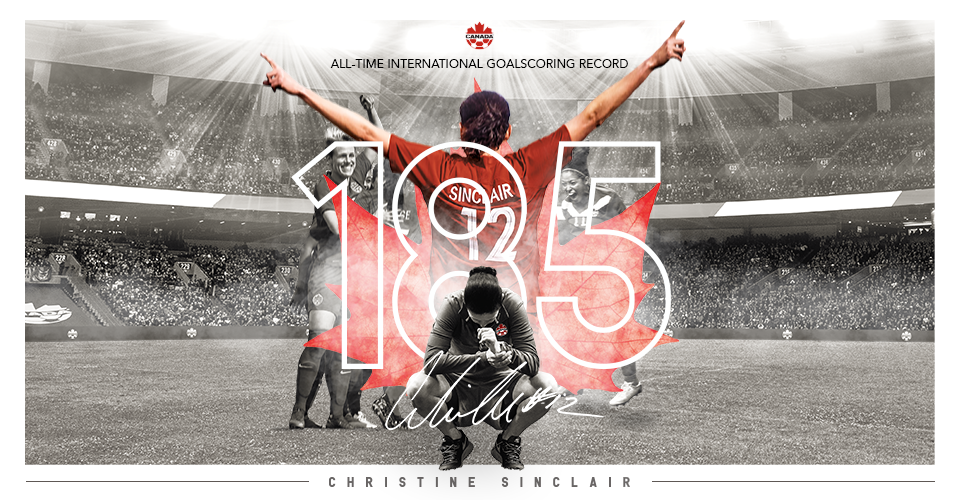 Christine Sinclair scoring her 185th goal to break the world’s all-time international goalscoring record has been named the 2020 Canada Soccer Moment of the Year. The Canadian captain’s historic moment came in the 23rd minute of Canada’s opening match at the 2020 Concacaf Women’s Olympic Qualifying Championship on 29 January 2020 at H-E-B Park in Edinburg, Texas, USA.

The goal set Canada Soccer’s Women’s National Team’s star Sinclair apart from all international footballers in the more than 150 years of the game. Now in her 21st international season, Sinclair surpassed Abby Wambach (184 goals) who held the record since 2013 after she surpassed former record holder Mia Hamm (159 goals). Including matches played through March 2020, Sinclair has scored 186 goals in 296 international matches.

“When we think back to some of the great moments in sport, we can cherish the moment that our Canadian captain Christine Sinclair became the world’s all-time international goalscoring record holder,” said Dr. Nick Bontis, Canada Soccer President. “To score 185 goals at the international level is an incredible feat and we may never get to see such a thing again in our lifetime. Watching Christine Sinclair lead Canada on the world stage has offered all of us some of the best memories as sports fans and as proud Canadians.”

After giving Canada the 1-0 lead on a penalty, Sinclair scored the record-breaking goal in the 23rd minute to give Canada a 4-0 first half lead. On the play, Jessie Fleming won the turnover from Calvonis Prentice, moved towards goal and played it to Adriana Leon, then Leon played it to Sinclair who finished with a right-footed shot from inside the box.

“Christine Sinclair, an absolute treasure to Canada and Canadian sport, is truly deserving of her remarkable achievement in setting the world’s all-time international goalscoring record,” said Peter Montopoli, Canada Soccer General Secretary. “She has been making history throughout her career, leading Canada with skill, determination, pride and honour on the international stage. There is only one Christine Sinclair and she is simply greatest of all time.”