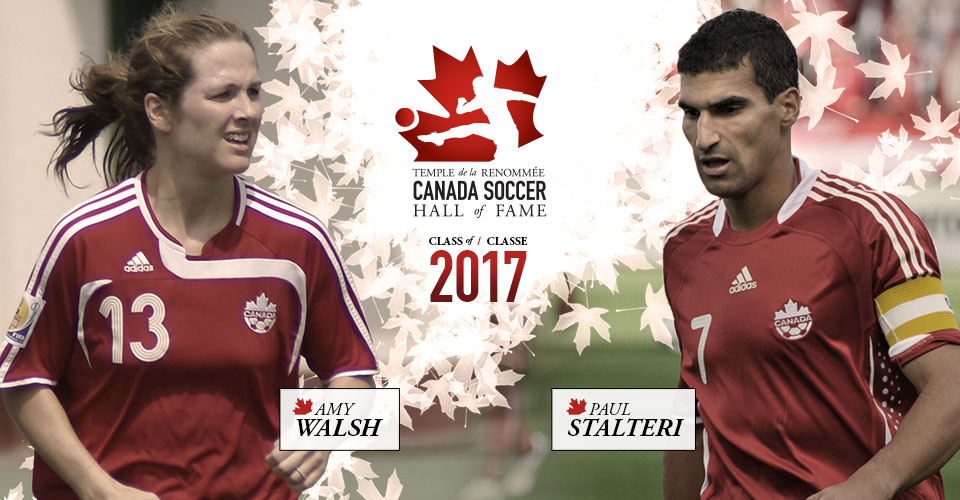 Class of 2017: Stalteri and Walsh named to Canada Soccer Hall of Fame

“I am honoured to be inducted into the Canada Soccer Hall of Fame and would also like to congratulate Amy Walsh as part of the Class of 2017,” said Paul Stalteri. “I am grateful to have had a long career with the National Team as well as at the club level in Europe.”

“I would like to thank family and friends as well as my teammates from Canada to Europe and from the youth teams up to the National Team,” said Stalteri.”

Walsh was a CONCACAF champion, helping Canada win the 1998 CONCACAF Women’s Championship in Toronto. She won three CONCACAF medals (one gold, two silver), played in two FIFA Women’s World Cups and one Women’s Olympic Football Tournament. At the professional level, she helped Atlanta Beat reach the 2001 WUSA final, only to fall on kicks from the penalty mark.

“I am profoundly honoured to be inducted into the Canada Soccer Hall of Fame as part of the Class of 2017 alongside Paul Stalteri,” said Amy Walsh. “I am humbled that I will now stand shoulder to shoulder with many of my soccer heroes such as Connie Cant, Geri Donnelly and Andrea Neil.”

Walsh was a four-time Québec player of the year (senior player of excellence 2000, 2001, 2004; senior elite player in 2003). She made 102 international appearances, also setting a Canadian record for consecutive starts from 1998 to 2001 (43 matches, finally tied in 2016 by Christine Sinclair). Walsh won a Québec Soccer centennial medal in 2011 and was recognised as one of Canada Soccer’s top 30 women’s footballers in 2012. She became an honoured member of the Québec Soccer Hall of Fame in 2013

Walsh played her youth football with St-Bruno, Brossard, and Lakeshore, the last of which she won a national title at the U-19 level. After her stint with the Atlanta Beat in the short-lived WUSA, she played with Ottawa Fury FC, FC Sélect Rive-Sud, Montréal Xtreme, and Comètes de Laval.

“I would like to thank my parents for their loving encouragement and support; my siblings for their fierce loyalty and friendship; and my husband, JP, for his unwavering belief in me,” said Walsh.