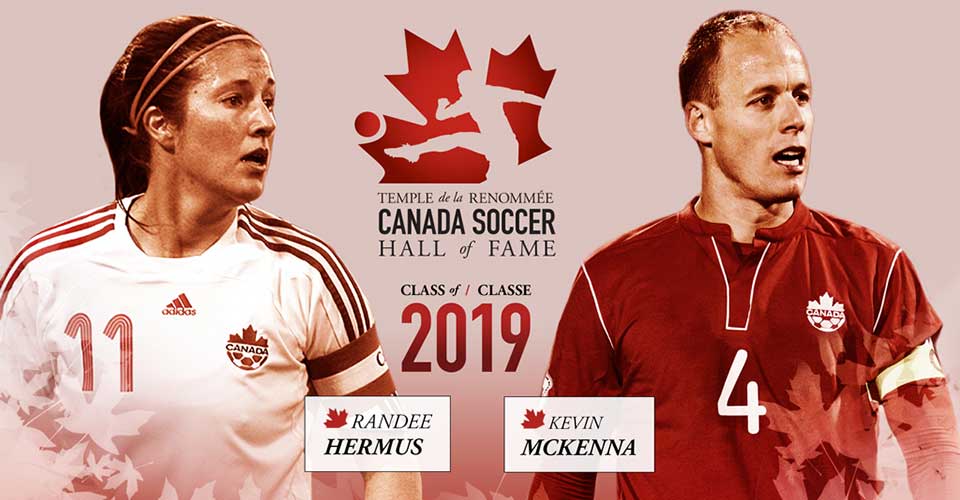 Class of 2019: Hermus and McKenna named to Canada Soccer Hall of Fame

Canada Soccer has announced that former National Team standouts Randee Hermus and Kevin McKenna have been named to the Canada Soccer Hall of Fame. The two […]

Canada Soccer has announced that former National Team standouts Randee Hermus and Kevin McKenna have been named to the Canada Soccer Hall of Fame. The two stars will be inducted as part of the Class of 2019 at future home international matches this year.

“Canada Soccer is honoured to welcome Kevin McKenna and Randee Hermus to the Canada Soccer Hall of Fame as part of the Class of 2019,” said Steven Reed, Canada Soccer President. “Randee and Kevin were Canadian stars and trailblazers in both club and international football, with Randee part of our country’s first-ever participation at the Olympic Games and Kevin part of our first team to play in the FIFA Confederations Cup. They are both truly deserving of this honour after outstanding careers in football.”

Randee Hermus played nine international seasons for Canada from 2000 to 2008, notably making 113 international “A” appearances as a midfielder, centre back and full back. She represented Canada at two FIFA Women’s World Cups and one Women’s Olympic Football Tournament. She scored 12 goals, recorded four assists, won three Concacaf silver medals, and one Pan American Games bronze medal. From 2005 to 2008, she made a then-record of 46 consecutive appearances for Canada.

Hermus was twice the runner up in voting for Canadian Player of the Year, finishing second behind Christine Sinclair in 2004 and 2005. She played club football in Canada and Norway and was Most Valuable Player of the 2004 USL W-League Championship. She was a two-time USL W-League winner with Vancouver Whitecaps (2004, 2006) and a two-time Canada Soccer National Championships Jubilee Trophy winner with Surrey United SC (2006, 2011). She is also an honoured member of the Simon Fraser University Athletics Hall of Fame.

“I am unbelievably honoured to be inducted to the Canada Soccer Hall of Fame as part of the Class of 2019 alongside Kevin McKenna,” said Randee Hermus. “To accompany my soccer heroes like Geri Donnelly, Silvana Burtini and Amy Walsh is both humbling and astonishing. It is without hesitation that I must first and foremost thank my parents for their unconditional love and support throughout my entire playing career.”

Kevin McKenna played 13 international seasons for Canada from 2000 to 2012, notably serving as Men’s National Team captain for 27 matches. Featuring at centre back and sometimes up front on the forward line, he scored 11 goals and three assists in 63 international “A” appearances. He represented Canada at the FIFA Confederations Cup Korea/Japan 2001, four cycles of FIFA World Cup Qualifiers, and a then joint-record five editions of the Concacaf Gold Cup. He was a Concacaf Gold Cup tournament all-star in 2002 when Canada finished in third place.

“It is a privilege to be inducted to the Canada Soccer Hall of Fame as part of the Class of 2019 alongside Randee Hermus,” said Kevin McKenna. “Growing up, you never know where the sport will take you, but I was very lucky to play the game professionally and to represent my country. It was a special honour every time that I put on that Canadian jersey.”

CANADA SOCCER HALL of FAME
The Canada Soccer Hall of Fame celebrates the individual and team achievements and traditions  in the game of soccer in Canada. Including the Class of 2019, the Canada Soccer Hall of Fame has welcomed 127 players, 13 managers/coaches, 10 officials, and 40 builders as honoured members since 2000. Honoured members, by their achievements and passion, have made a positive impact to soccer in Canada and have left a legacy for the sport in our country and around the world.

This year’s Class of 2019 was selected by the Voting Group for Modern Canadian Players from a list of 17 nominations.