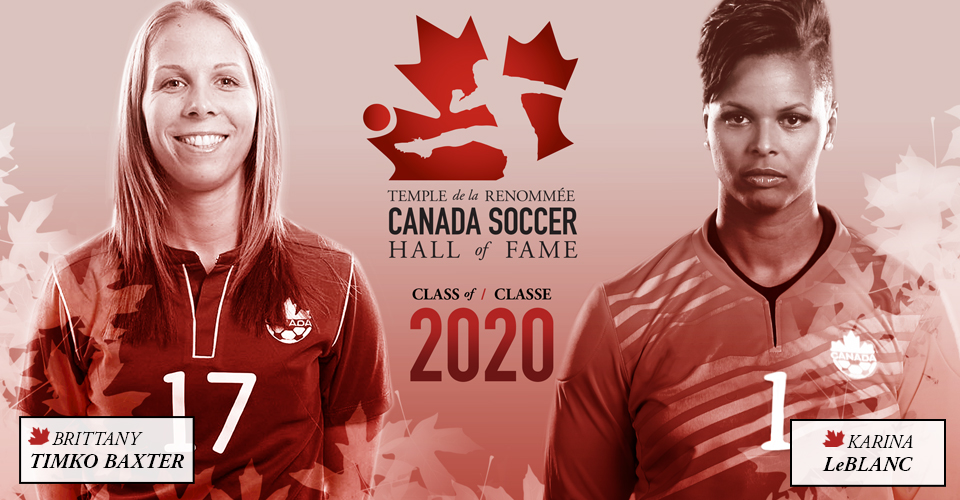 “Canada Soccer is honoured to welcome Karina LeBlanc and Brittany Timko Baxter to the Canada Soccer Hall of Fame as part of the Class of 2020,” said Steven Reed, Canada Soccer President. “Karina and Brittany have been part of a historic era for our Women’s National Team Program, from winning a bronze medal at the London 2012 Olympic Games to each representing their country more than 100 times.”

Karina LeBlanc is Canada’s only two-time Concacaf champion and first five-time FIFA Women’s World Cup participant. She represented Canada on the international stage for 18 years from 1998 to 2015, retiring as the second-longest serving member in Women’s National Team Program history. She made 110 international “A” appearances, won six Concacaf medals (including gold in 1998 and 2010), two Pan American Games medals (including gold in 2011), and that famous bronze medal from the London 2012 Olympic Games (which was recently honoured by the Canadian Olympic Hall of Fame).

LeBlanc played her professional football in Canada and USA, notably winning the 2013 NWSL Championship with Portland Thorns FC in 2013 and reaching the Women’s Professional Soccer final with Los Angeles Sol in 2009. She was an All-WUSA Second Team goalkeeper in 2003, the USL W-League Goalkeeper of the Year in 2005, an All-Tournament Team goalkeeper at the 2004 Concacaf Women’s Olympic Qualifying Tournament, and the first runner-up in voting for the 2009 Canada Soccer Player of the Year. She also set Canada Soccer’s Women’s National Team records for most clean sheets in a season (8 in 2010) and career (47).

“Thank you Canada Soccer for this remarkable honour to join such a prestigious group of people as part of the Class of 2020 alongside Brittany Timko in the Canada Soccer Hall of Fame,” said honoured member Karina LeBlanc. “As a kid I dreamed of playing for my country, but never did I imagine that my dream would lead me to the Hall of Fame as a individual. This means so much to me as this truly is the best of the best of soccer in Canada.”

Brittany Timko Baxter is a London 2012 Olympic Games medalist and three-time FIFA Women’s World Cup participant. She made 132 international “A” appearances, won five medals from five Concacaf tournaments and one Pan American Games medal. Playing across multiple positions from fullback to midfield to forward, she scored five goals and eight assists. At the youth level, she won silver at the FIFA U-19 Women’s World Championship Canada 2002, won the Concacaf Women’s Under-20 Championship in 2004, and won the Golden Boot as the top scorer at the FIFA U-19 Women’s World Championship Thailand 2004.

“Thank you to Canada Soccer for this incredible honour to join my idols into the Canada Soccer Hall of Fame as part of the Class of 2020,” said honoured member Brittany Timko Baxter. “It’s even more special that I get to do it alongside a mentor, friend and sister in Karina LeBlanc. Thank you to all the players who came before me to help a five-year old girl dream of one day wearing the maple leaf and representing Canada.”

CANADA SOCCER HALL of FAME
The Canada Soccer Hall of Fame celebrates the individual and team achievements and traditions in the game of soccer in Canada. Including the Class of 2020, the Canada Soccer Hall of Fame has welcomed 129 players, 13 managers/coaches, 10 officials, and 41 builders as honoured members since 2000. Honoured members, by their achievements and passion, have made a positive impact to soccer in Canada and have left a legacy for the sport in our country and around the world.

This year’s Class of 2020 was selected by the Voting Group for Modern Canadian Players from a list of 11 nominations.