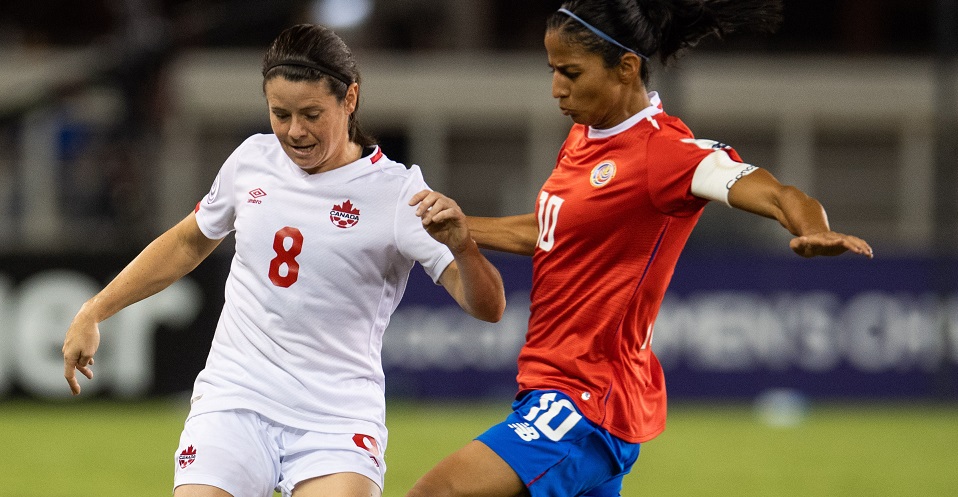 With its ticket to the Semi-Final booked, Canada is only one win away from securing a spot in next summer’s FIFA Women’s World Cup 2019™.  Canada […]

With its ticket to the Semi-Final booked, Canada is only one win away from securing a spot in next summer’s FIFA Women’s World Cup 2019™.  Canada will face Panama on 14 October (17:00 ET/14:00 PT) with the winner automatically qualifying and heading to the tournament Final and the losing team playing in the 3rd place match for the third spot at France 2019.

Canada is heading into the Semi-Final on a high having swept the group stage with wins against Jamaica (2-0), Cuba (12-0) and Costa Rica (3-1).  A late goal in the match against Costa Rica was Canada’s only goal against in the group stage with Canada’s 17 goals for in the competition highlighting its attacking prowess.  Captain Christine Sinclair has scored two goals in the competition and now sits only ten goals back from capturing the FIFA record for the most international goals scored.

Canada has eight goal scorers in the competition in Jordyn Huitema (4), Adriana Leon (4), Nichelle Prince (3), Christine Sinclair (2), Janine Beckie (1), Diana Matheson (1), Rebecca Quinn (1) and Deanne Rose (1).
Canada and Semi-Final opponent Panama have only faced each other once in international competition, with Canada defeating Panama 6:0 during the Concacaf Women’s Olympic Qualifying tournament in 2004.

Panama, who were making their return to the Concacaf tournament after 12 years, will play its first-ever continental Semi-Final when it faces Canada on Sunday.

Ranked 66th in the world, Panama has never qualified for a FIFA Women’s World Cup and finished second in Group A behind the USA, Panama logged wins over Trinidad and Tobago and Mexico.

Sunday’s Semi-Final against Panama will be Canada’s 11th match of 2018.  Of it’s ten games so far this year,  Canada has come away with seven wins and three losses with 27 goals for and eight against.

Of note, Diana Matheson’s next appearance will mark 200 for the long-time Women’s National Team player. A mobile midfielder who finds space well, and uses her clinical ball distribution to support Canada’s attack, Matheson has been a key player for Canada since 2003 making 181 starts for the squad.

What is at stake?

The 2018 Concacaf Women’s Championship will qualify three teams to the FIFA Women’s World Cup France 2019™ and a fourth into a two-game playoff with Argentina, the third-place team from the South America confederation.   Canada’s last participation in the competition was in 2010 when the team capturing the title and qualified for Germany 2011.  Canada received automatic entry into Canada 2015 as hosts.

The 2019 edition of the FIFA Women’s World Cup will be the second to include 24 nations after the competition was expanded for Canada 2015 up from 16 that were in Germany in 2011.

The qualified nations so far are: host, France; England, Germany, Italy, Norway, Scotland, Spain and Sweden from UEFA. Brazil and Chile from South America, and Australia, China PR, Japan, Korea Republic and Thailand from the AFC.
About Canada Soccer
Canada Soccer, in partnership with its membership and its partners, provides leadership in the pursuit of excellence in soccer, both at the national and international levels. Canada Soccer not only strives to lead Canada to victory, but also encourages Canadians to a life-long passion for soccer. For more details on Canada Soccer, visit the official website at canadasoccer.com