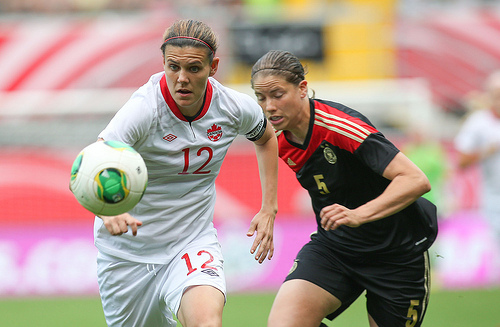 Countdown is on as Canada WNT faces Germany in Vancouver

With the countdown well and truly on for the FIFA Women’s World Cup Canada 2015™, every camp and every game now take on a whole new dimension for Canada’s Women’s National Team.

Canada will be looking for a first ever win over Germany as they take on the defending European Champions on Wednesday at BC Place Stadium in Vancouver and know it’s top teams like the Germans that could very well be in their way if they want to go far in the World Cup.

“They’re a fantastic team and I’m thankful that they chose to come over to play against us,” said Head Coach John Herdman on Tuesday. “We’ve spent two years building this team since the 2012 Olympics. Every year we’ve tried to take a step forward and you can’t get a bigger test than this. The Germans are current European Champions and they’re going to be quite a test for us.”

Germany has brought a young team that’s bursting with talent into Vancouver but an ever-developing Canadian team that mixes experience with some exciting young talents, they know a solid result will have to combine the sort of technical and tactical work they’ve been doing along with what has defined Canadian teams in the past.

“Our expectation is when the girls put on that red shirt, the fight is always going to be there. It’s part of our DNA. We don’t want to lose that,” said Herdman. “But at the same time, if we want to stay in tune with the modern game, we have to move with the modern game.”

BC Place will be the venue of the FIFA Women’s World Cup Canada 2015TM final so any team participating in the tournament will have that stadium in the crosshairs and for Canada, this is the first of two games at the stadium in 2014. They’ll also be taking on Japan in the second of two friendlies in October at the facility.

The game will be carried live on Sportsnet One and fans can get full coverage across Canada Soccer’s platforms. Live updates will be available on Twitter @CanadaSoccerEN and @CanadaSoccerFR and CanadaSoccerTV will have post-match interviews and highlights.