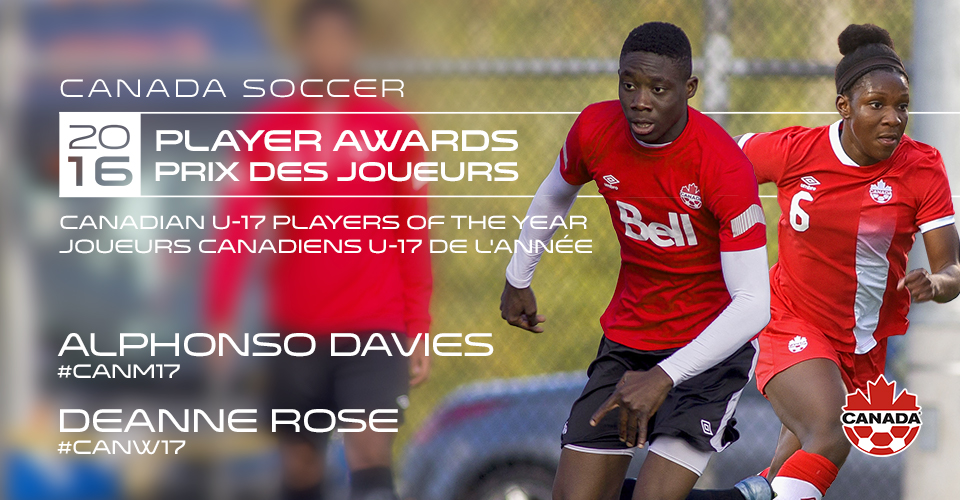 Alphonso Davies and Deanne Rose have been named 2016 Canadian U-17 Players of the Year. Canada’s two footballers won the honour from a vote shared by national team coaches (50%) as well as Canadian clubs and coaches (50%). Davies of Edmonton, AB plays for Vancouver Whitecaps FC while Rose of Alliston, ON plays for Scarborough GS United.

Alphonso Davies is a member of Canada’s national youth program as well as Vancouver Whitecaps FC. In 2016, he became the youngest player in Canada Soccer’s Canadian Championship, helping Whitecaps FC reach the national final. In CONCACAF Champions League, Davies helped Whitecaps FC win their group and advance to the quarter-final stage, which will be played in February 2017.

At the youth level, Davies played three matches for Canada in 2016. In March, he helped Canada win 2:1 away over England as part of the Men’s National U-20 Team; in November, he won back-to-back away matches over Jamaica with the Men’s National U-17 Team, scoring a goal and an assist in the first match and wearing the captain’s armband in the second match.

“Alphonso Davies fully deserves the award,” said Tony Fonseca, Canada Soccer’s Technical Director. “At such a young age, he has already made an impact at Whitecaps FC and there is plenty of optimism about his future as he matures. His skills, work ethic and humbleness are remarkable.”

Deanne Rose was a member of three National Teams in 2016 – the Women’s U-17, U-20 and National Team. As the youngest member of the Olympic bronze medal winning team in 2016, she scored a goal and an assist in the winning match against host Brazil. In all, she scored four goals and three assists in 16 international matches, helping Canada post a record 15 wins over the course of the calendar year. She also won her first CONCACAF medal, a silver at the CONCACAF Women’s Olympic Qualifying Tournament.

At the club level, she helped Scarborough GS United win their fourth-straight Ontario Cup title, scoring one goal in the championship final. At the national youth level, she scored one goal and one assist in seven matches, including matches at both the FIFA U-17 Women’s World Cup Jordan 2016 and FIFA U-20 Women’s World Cup Papua New Guinea 2016.

“This award caps off a fantastic 2016 for the youngest goal score in Olympic history,” said John Herdman, Canada Soccer’s Women’s National Team Head Coach. “Her international journey has only just begun and I am certain that she will be delivering many more great memories for Canadians in the years to come.”