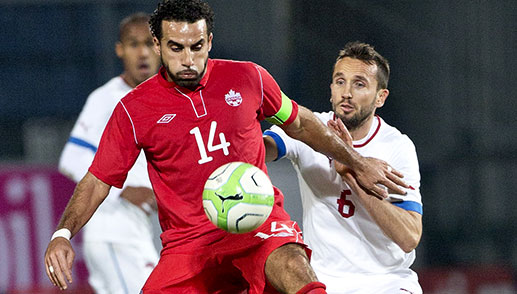 De Rosario: Canada MNT is headed in the right direction

There’s no denying it’s been a difficult year for Canada’s Men’s National Team but for team captain Dwayne De Rosario, the team is on the right path and there would be no better way to show that than by pulling out an upset result in Tuesday’s men’s international friendly against Slovenia.

De Rosario, who will be looking to get his 77th cap for Canada on Tuesday as Canada finishes off its 2013 calendar of games in Celje, SVN.

“We’re playing tough opponents,” De Rosario said in a conference call with media on Monday as Canada, currently ranked at 111, will be taking on the 30th-ranked Slovenians just four days after losing 2:0 to the 27th-ranked Czech Republic.

“In the Australia game we had chances. In the Czech game we had some decent chances and hopefully tomorrow we can bury one or two of them.”

Tuesday marks the end of the third camp under new Head Coach Benito Floro. To date, his camps have featured a healthy mix of youth and experience. But with over a year to go until Canada’s next competitive games, there is an abundance of time for the team to find the right mix.

Training sessions involving plenty of tactical discussions have been balanced out with lots of video study and De Rosario feels the young players in the camp are learning a great deal.

“It’s a great time for a young player to come into the fold. I think there’s a lot of information being taught every camp—a lot of valuable information,” De Rosario said. “The players are starting to become more receptive to his ideas and the way he would like us to play.”