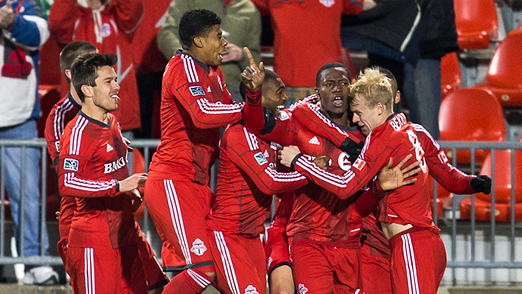 Toronto notches 2:0 win over Montréal in opening leg of semi-final.

Canadian U-20 captain Doneil Henry scored the match winner and striker Andrew Wiedeman added a second as four-time defending champions Toronto FC notched a 2:0 win over Impact Montréal in the first leg of the semi-final of the 2013 Amway Canadian Championship.

Toronto’s win over Montréal on Wednesday 24 April at BMO Field sets up a daunting second-leg challenge for the Impact who will now need to win by at least two goals in regulation time to keep the tie alive.

“We put in a lot of hard work to setup this performance,” said Toronto FC coach Ryan Nelsen.

“Doneil Henry has looked very strong and his goal tonight was the icing on the cake for a solid performance over 93 minutes.

For Impact Montréal coach Marco Schällibaum the loss was the unfortunate result of too many errors by his side.

“We made too many mistakes in the second half and Toronto were the better team,” said Schällibaum.

The opening match of the 2013 Amway Canadian Championship featured eight Canadian players. Young Canadian defender Henry scored the game-winning goal and was named man of the match by Sportsnet.

Luis Silva and Hogan Emprhaim replaced Bekker and Braun in the 72nd minute.

Wiedeman received a yellow card in the 84th minute.

Calum Mallace received a yellow card in the 55th minute.

The two teams will next come together for the second leg of the semi-final tie on Wednesday 1 May at Stade Saputo in Montréal (local kick-off 19.45).