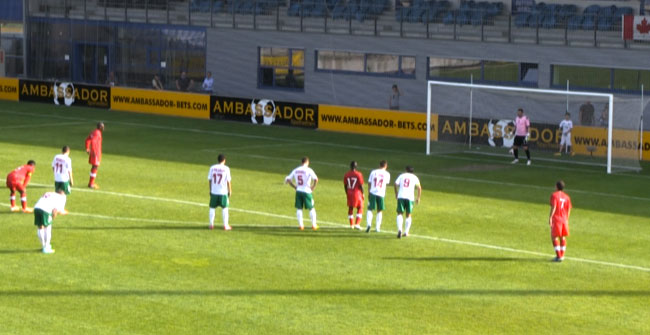 Draw with Bulgaria a small first step for Canada MNT

After the difficult year 2013 was for Canada’s Men’s National Team, there are glimmers that the tough times are starting to pay off.

One goal and no wins in 13 games were the glaring statistics that came out of last year but a performance in a tiny town in the Austrian countryside against a stern Bulgarian side that saw Canada pick up its first goal of the season and a deserved draw will raise the hope that better days are ahead.

A mountain of work lies ahead for the team but Canada could easily have had a few goals in the first half but for some fine goalkeeping from the Bulgarian side. The second half battle was one that brought the Canadians together and helped the team to grow and hold out for a result.

“In the first half we played well combined and in the second half, there was not enough physical energy to play combined,” said Head Coach Benito Floro, noting most of his players are feeling the rigours of long European club seasons and had to adapt and play more tactically in the second half.

“The other team had experienced players on the bench and it was going to be very difficult for us to maintain our physical level. We needed to change the strategy in the second half.”

Against a Bulgarian team that is much higher in the FIFA ranks, Canada pressed when Bulgaria was in possession created and some early turnovers.

Even after taking the lead, Bulgaria was frustrated by the resilient Canadians and tried to change things up but it was to no avail.

“They switched things up in the second half and went a little more direct, which is a compliment to us as a team and as a back four,” said defender David Edgar, who departs camp on Saturday as he’s about to get married.

“We stayed really compact, put our bodies on the line and we got a good draw out of it.”

After an encouraging performance against Bulgaria, Canada now looks for more goals in the opposing end as they chase an elusive victory on Tuesday against Moldova.