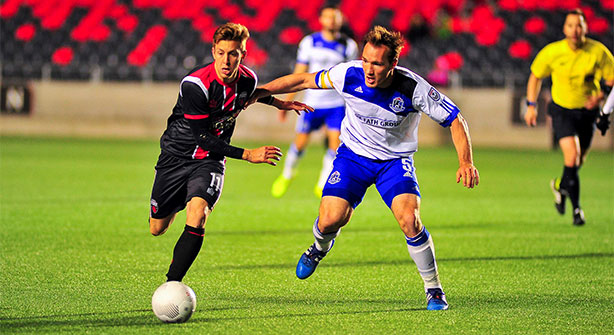 FC Edmonton took a 3-1 lead over Ottawa Fury FC in the first leg of the 2015 Amway Canadian Championship.

FC Edmonton came away on top with a three goals to one lead in the two-leg preliminary series of the 2015 Amway Canadian Championship. A trio of late goals was the culprit in a reversal of fortunes between the two Canadian clubs.

Host Ottawa Fury FC led for much of the 22 April match, in fact scoring just 65 seconds from the opening whistle. Ottawa failed to add to its lead, though, then conceded three times in the last 12 minutes of the match. Daryl Fordyce, Lance Laing and Tomi Ameobi were the FC Edmonton goal scorers.

The two-leg preliminary series in the 2015 Amway Canadian Championship will conclude on 29 April at Clarke Field in Edmonton (20.00 local kick off). The winner of the series will face Vancouver Whitecaps FC in the Championship’s semi-final stage, while Toronto FC will face Impact Montréal FC in the other semi-final match that kicks off on 6 May.

In the first match of the 2015 schedule, winger Oliver Minatel opened the scoring in the second minute, the second-fastest goal in Amway Canadian Championship history. By midway through the first half, Ottawa was quickly building towards a second goal, but the final touch would never materialise. FC Edmonton centre back Mallan Roberts broke up one Ottawa attack shortly after the half hour mark, then Ottawa forward Andrew Wiedeman went wide after a nice set up from teammate Sinisa Ubiparipovic.

Wiedeman made a nice play shortly before the break to create another scoring chance, but his shot hit the side of the netting in the 43rd minute.

In the second half, Ottawa again had terrific chances, with once Minatel screamer missing the top of the goal. FC Edmonton then could have scored an equaliser on a penalty kick, but the save by goalkeeper Romuald Peiser reinvigorated the home side’s attack.

That second goal was not to be, not even in the dying minutes with numbers in the box. FC Edmonton substitutes Fordyce (83′) and Laing (88′) reversed the scoreline before Ameobi added a last minute cushion (90’+5).

This marks the eighth year of the Amway Canadian Championship. This year’s winner, to be crowned in August, will qualify for the 2016-17 season of CONCACAF Champions League.