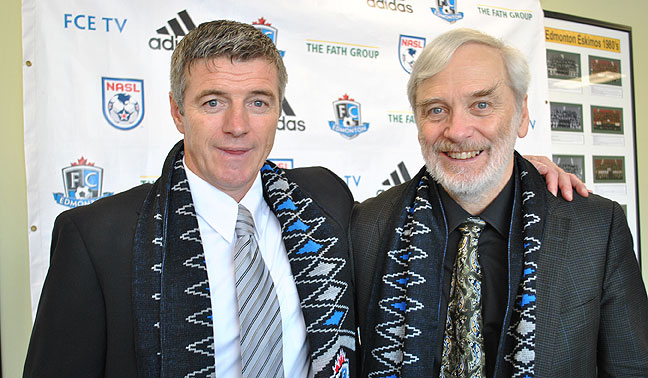 FC Edmonton has named Colin Miller as its new head coach in advance of the 2013 North American Soccer League and 2013 Amway Canadian Championship season. Miller was formerly introduced to media in Edmonton at a press conference on 27 November 2012.

“I’m looking forward to introducing a new type of soccer into the City of Edmonton,” said Miller. “Something that’s exciting to watch, something that will bring the team good results and something (to which) supporters can be proud.”

Miller himself is a former player in the old NASL, having made his debut as a teenager with Toronto Blizzard. He went on to play professional football in Scotland and England, with a notable stop at Hamilton Academical. At the international level, he made 61 appearances for Canada, including participation in three cycles of FIFA World Cup Qualifiers.

As a coach, he has worked for Hamilton Academical, Abbotsford Rangers, and Vancouver Whitecaps FC. He has also worked with a number of Canada’s national and national youth teams, including a brief call as Canada’s national head coach in 2003.

“We pride ourselves on developing Canadian talent and giving Canadian players the chance to become professional,” said FC Edmonton owner Tom Fath. “It’s time we help develop our Canadian coaches. We are happy to have Colin be a part of our team.”

Miller will start his role as FC Edmonton’s head coach this week when the club kicks off its 2012 Winter Combine at Commonwealth Community Recreation Centre Fieldhouse.

As for next year’s Amway Canadian Championship, Miller’s FC Edmonton club will face Vancouver Whitecaps FC in the semi-final round on 24 April and 1 May 2013.