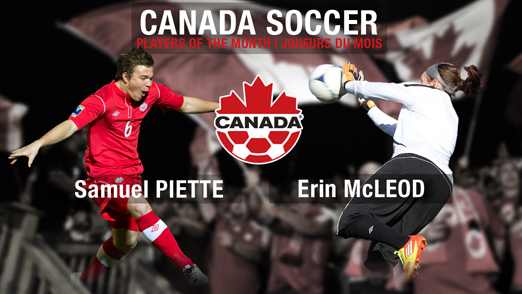 Canada Soccer is pleased to recognize Samuel Piette and Erin McLeod as Players of the Month for February 2013.

Piette, a capped Men’s National Team player, started all three matches of Canada’s campaign at the 2013 CONCACAF U-20 Championship – scoring a pair of highlight-reel goals along the way.

The 18-year-old midfielder won praise at the tournament for his hard-nosed, dynamic style in midfield for Canada. Piette, one of the leaders of the U-20 team, took the captain’s arm-band when Doneil Henry left the tournament quarter-final due to injury.

Ahead of the CONCACAF Championship, Piette made his debut for the Fortuna Düsseldorf U-19 Team on 3 February in the U-19 Bundesliga in Germany.

McLeod, who finished Canada’s January action on a high by being named player of the match – and keeping a clean sheet – in the team’s 0:0 draw against Norway at the Yongchuan Cup in China, has been commended for her excellent work-rate and leadership at the Women’s National Team’s February camp in Cyprus.

“Keepers can often get overlooked in terms of awards and recognition – but Erin’s presence as one of the leaders on this team has been, and will continue to be invaluable.