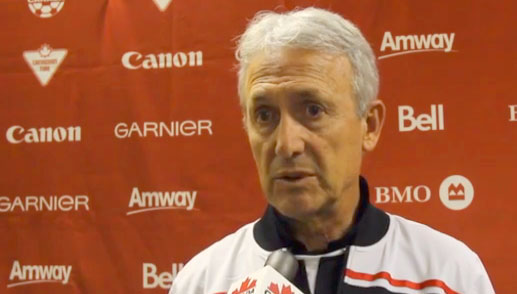 There’s no better way to end a national team camp than with a victory and for Canada’s Men’s National Team that’s how their first camp of 2014 ended as they comprehensively beat the NASL’s Fort Lauderdale Strikers 2:0 on Tuesday night.

Though it may not have been an international game against another country, it was a good way to round off the week with a very young Canadian squad that learned a great deal after arriving in Florida earlier this month.

“It has been a good camp because the majority of goals that we proposed at the beginning of camp have been achieved,” said Head Coach Benito Floro. “Players have worked hard in the training sessions and in the games with good intensity and in doing so, creating a lot of scoring chances.”

The team had assembled on 12 January in Sunrise, Florida, USA and spent most days working on two training sessions a day prior to an intra squad match on Saturday and Tuesday’s game against the Strikers.

With 12 players on the squad eligible for qualifying for the 2016 Olympics, which Floro will also coach, it was an impressive end to what was a good first step.

The camp also heavily featured players who are products of Canada’s professional clubs and academies as all five pro clubs were represented.

“I’m very happy with the youth players because they participated with a lot of desire,” said Floro. “At the same time they played very well so they demonstrated that it is necessary to work a lot with them because I think if we work hard with them they can form the base of the first team.”

Floro added that despite the signs of promise from the younger group on the technical and physical aspects of the game, there still is plenty of room to grow tactically and he’s anxious to keep developing the tactical side of the Canadian game at all levels.

Highlights from the CanMNT 2:0 victory over the Ft. Lauderdale Strikers and Benito Floro’s comments on the camp