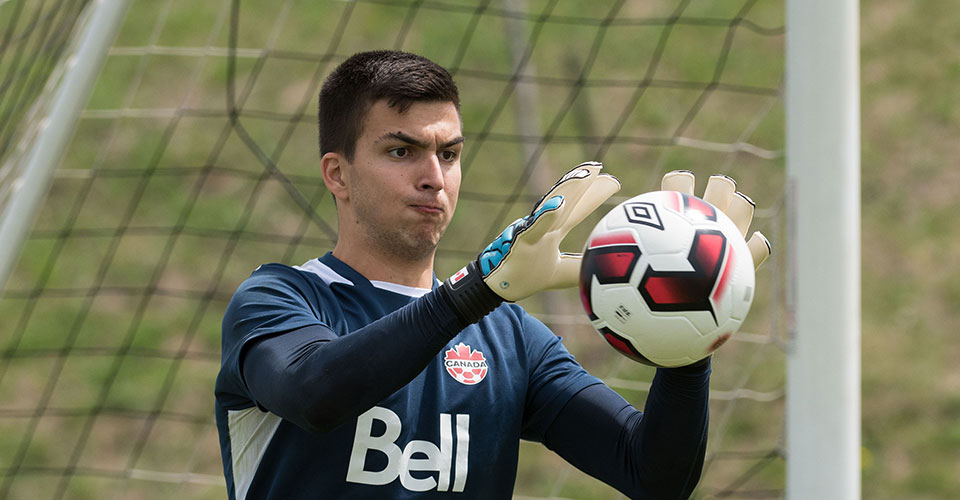 Five young Canadian soccer players have earned their first call ups to the Men’s National Team. The young footballers have all come up through the national youth program before taking that next step in their international careers.

All five players are Canadian Championship winners in the past two years with either Toronto FC (2016) or Vancouver Whitecaps FC (2015). They have also all either participated in a CONCACAF or Pan American Games youth international tournament. As part of Canada Soccer’s Men’s EXCEL Program, the five players benefitted from 423 days in the national youth program.

Canada Soccer’s Men’s National Team is in Fort Lauderdale, FL, USA from 12-18 January. From the larger group of 27 players, a travel squad of 18 players will head to Bermuda for a Men’s International Friendly match on 22 January.

“We are really excited about the mix of young and experienced players,” said Michael Findlay, Canada Soccer’s Men’s National Team Interim Head Coach. “The young players can learn from those that have played at the professional and international level, while those experienced players are motivated by the next generation. We want to create the best environment for our players to excel.”

Molham Babouli – Toronto FC’s 24-year old forward made his debut in the Canadian Championship in 2016, making four appearances and recording two assists before lifting the Voyageurs Cup. The former League1 Ontario all-star made his debut in the national program in 2015. He pushed Canada to within a win of qualifying for the Rio 2016 Olympic Games.

Marco Carducci – The 20-year old goalkeeper was part of Vancouver Whitecaps FC’s 2015 Canadian Championship winning season. The former Canadian U-17 Player of the Year joined the Canadian youth program at age 15. He represented Canada at the FIFA U-17 World Cup UAE 2013.

Jay Chapman – Toronto FC’s 23-year old midfielder won the 2016 Canadian Championship in his second year with the big club. He was 16 years old when he joined the Canadian youth program and has since participated in two CONCACAF tournaments at the U-17 and U-23 levels (Olympic Qualifiers). He represented Canada at the FIFA U-17 World Cup Mexico 2011.

Raheem Edwards – Toronto FC’s 21-year old forward won the 2016 Canadian Championship after making his debut as a substitute in the final match (down a goal in the series, Toronto FC pulled off a last-minute Championship victory). He was 19 years old when he made his debut in the Canadian program at the 2015 Pan American Games.

Ben McKendry – Vancouver Whitecaps FC’s 23-year old midfielder won the 2015 Canadian Championship and later earned man-of-the-match honours in the 2016 semi-finals. He was 17 years old when he joined the Canadian youth program and then represented Canada at the CONCACAF Men’s Under-20 Championship in 2013.