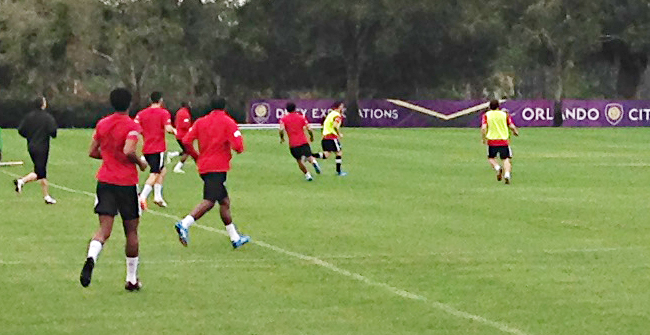 With four full training sessions into the Florida camp and two more prior to the first of two matches, Canada’s Men’s National Team Head Coach Benito Floro is steadily working at building a structured and efficient system that will provide his players the best environment to perform.

With two International Friendlies against world ranked 33 Iceland on Friday (16 January 16.30 ET / 13.30 PT) and Monday (19 January 16.00 ET / 13.00 PT), Floro and his group focused on preparing to offer a complete performance, controlling and maintaining shape on the defensive end while applying pressure and creating opportunities on top.

The team looked lively on the green pitches of Orlando on Wednesday, and the new faces of Kevon Black, Jonathan Grant, and Christopher Mannella, all on their first trip with Canada’s Men’s National Team, looked to be integrating well, connecting with the veterans on and off the field.

With most of the European-based players unavailable as the camp doesn’t fall in a FIFA international window, Floro has called in a predominantly North American-based squad and has used this time to further develop the team’s tactics in preparation for the team’s FIFA World Cup 2018 Qualifiers set to begin this June. It has also offered a look at some younger players that could be called upon when Olympic Qualifying time comes around.

The last match between Canada’s Men’s National Team and Iceland was in 2007 in Reykjavík. The match concluded in a 1:1 draw and featured four players that will once again be wearing Canada’s colours (Julian De Guzman, Patrice Bernier, Issey Nakajima-Farran and Iain Hume).

Both matches will be televised on beIN Sports and tweeted live @CanadaSoccerEN. Match reports will also be available on canadasoccer.com