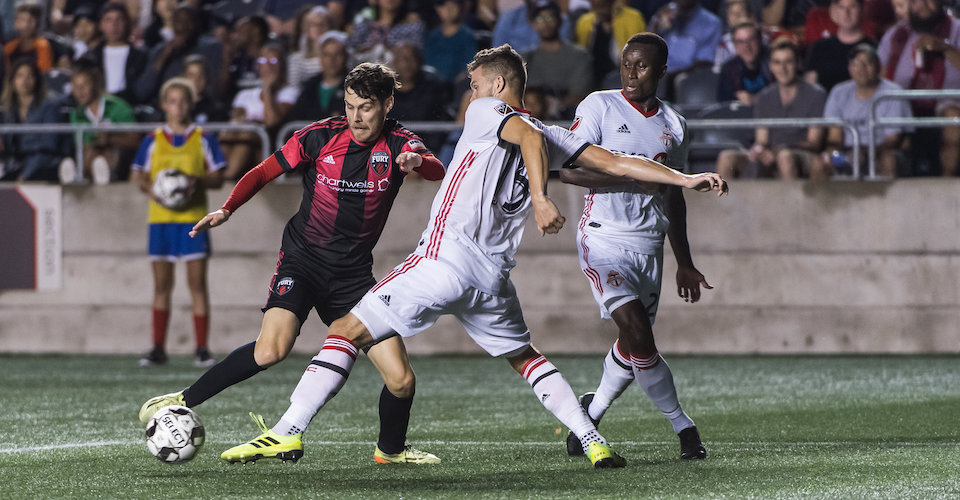 The Semi-Finals of the 2019 Canadian Championship have opened with former champions Toronto FC and Montréal Impact FC in the lead. The seven-time winners from Toronto […]

The Semi-Finals of the 2019 Canadian Championship have opened with former champions Toronto FC and Montréal Impact FC in the lead. The seven-time winners from Toronto won their opening leg away 2:0 over Ottawa Fury FC while the three-time winners from Montréal won at home 2:1 over Cavalry FC from Calgary.

The four Canadian teams will meet again on Wednesday 14 August, with the winners of each two-leg series advancing to the Canadian Championship Final round to be played 18 and 25 September. The Toronto-Ottawa match will be played at BMO Field in Toronto (19.30 local / 19.30 ET / 16.30 PT) while the Calgary-Montréal match will be played at Spruce Meadows Stadium in Calgary (19.30 local / 21.30 ET / 18.30 PT). Both matches will be broadcast live on OneSoccer.ca.

In Ottawa, Toronto FC extended their Canadian Championship unbeaten streak to eight matches, dating back to 2017 when they lost to Ottawa Fury FC in Ottawa. Drew Moor scored the winning goal in the 30’ from a Tsubasa Endoh corner kick combined with a Marky Delgado assist from inside the box. Toronto FC added to their lead with a 90’ +1 goal from Tsubasa Endoh to make the final score 2:0.

In Montréal, it was the Ignacio Piatti double that put the home side on the front foot. Piatti’s goals came in the 32’ and 49’ to make him the Impact’s all-time leading scorer with five goals in the competition. Cavalry FC fought back with Sergio Camargo scoring his second goal of the Championship in the 69’ to cut the Montréal Impact FC lead in half to 2:1 before Calvary FC was reduced to 10 men with Nik Ledgerwood’s second yellow card in the 71’.

With 12,665 fans in Montréal and 5,809 fans in Ottawa, attendance for the 2019 Canadian Championship surpassed 100,000 cumulative spectators for the third time since the competition’s inception in 2008. To date, there have been over one million fans that have attended Canada Soccer’s professional soccer competition from coast to coast.