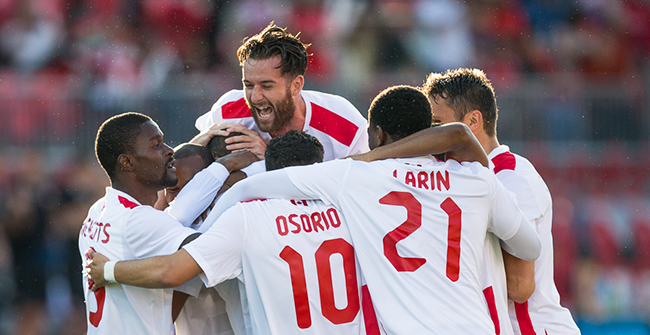 The result was never really in doubt but Canada comfortably took care of business at BMO Field on Tuesday night and now rides into the 2015 CONCACAF Gold Cup and the next round of qualifying for the 2018 FIFA World Cup Russia™ after an encouraging performance against Dominica.

With Tesho Akindele, Cyle Larin, and Tosaint Ricketts leading Canada’s Men’s National Team’s three-pronged attack in the 4:0 win over Dominica on Tuesday, there are signs that Canada’s offense is coming to life just at the right time as some big games lie ahead in the next month.

“It was nice that everyone was involved today and it felt good to combine with these guys,” said Ricketts, whose brace on the night moves him to double-digits in scoring for Canada with his ninth and 10th career goals.

“It showed that we have potential attacking-wise going forward.”

It’s a big summer for the team as these two games are the precursor to at least three games at the Gold Cup and now a fall season with more World Cup Qualifying.

And with the win, Canada’s now unbeaten in five games that includes a four game winning streak. The tests only get tougher from here on out but there’s a renewed belief that Canada can compete with the best teams in the region.

“I believe in our team because last year we played many friendly games against difficult teams and the performance of our team was very good,” said Head Coach Benito Floro. “If we arrive to this Gold Cup with the majority of the players in good condition, we can have opportunities to play at the same level (as the stronger teams in the region.”

The next time they’re in action will be at the Gold Cup. They open with El Salvador on 8 July at StubHub Centre in Carson, California before games against Jamaica (11 July in Houston) and Costa Rica (14 July at BMO Field in Toronto).