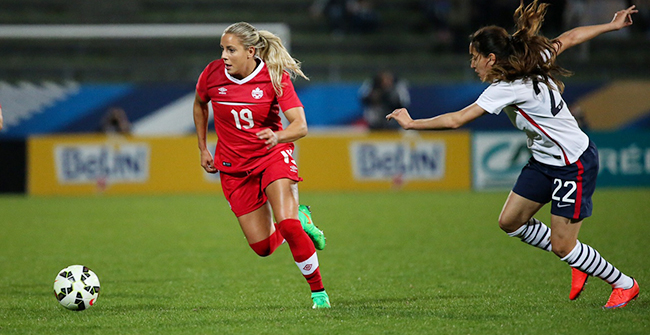 Just three days ago, Canada’s Women’s National Team landed in Paris after a marathon flight from Vancouver and had just two training sessions to adapt to a new continent and prepare for France, one of the best teams in the world.

In the end, Canada came back after a bit of a slow start in the first half and matched up well against a French team that was playing in front of more than 11-thousand boisterous home fans on Thursday night in Bondoufle.

“These (games) are great because we walk out with an opportunity to learn from some of those mistakes and that’s the level. The French were a yard sharper at times and a bit quicker,” said Head Coach John Herdman shortly after the full time whistle in Canada’s 1:0 loss to France.

“So we’ll learn with that and tighten things up. When you meet the French team in the tournament after four or fives games and you’ve battled and you’re at the pace of things, that’ll be a different game.”

France took a deserved lead late in the first half through Eugenie Le Sommer after they held long spells of possession but couldn’t break through an organized Canadian back line.

Canada found their feet as they went with a few more attackers in the second half and, on another day, one or two of those chances are being picked out of the French goal.

The shoe will be on the other foot in two months with Canada playing in front of the home support and staff and players know these last two months will be important to iron out the little mistakes to be as ready as they can when they step onto the field at Commonwealth Stadium on 6 June against China PR.

“We’ve just played arguably the best team in the world at this stage and we were very competitive in long periods. I think Canada could have nicked something in that game and it’s pretty much where we are against tier one teams,” said Herdman. “We’ll hang in, we’ll not lose our spirit and organizationally at times we nullified what they were trying to achieve.”