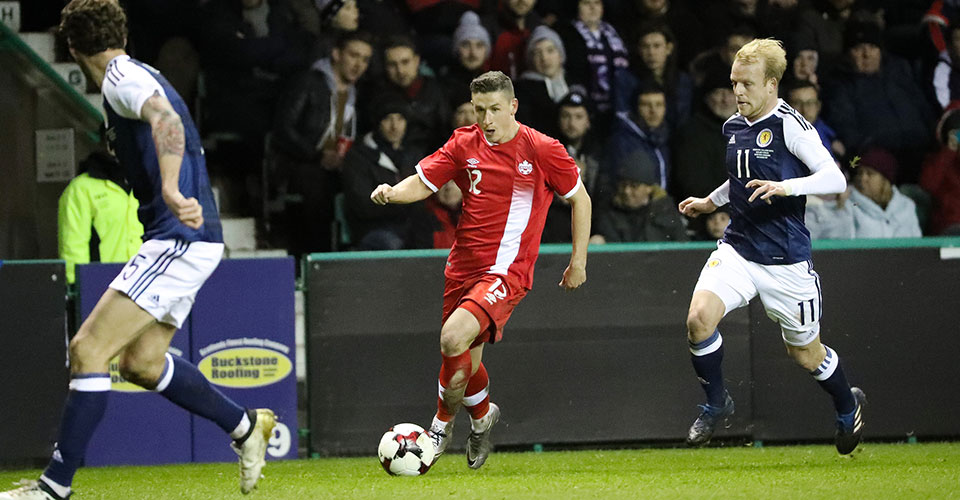 Fraser Aird scores in Canada’s 1:1 away draw at Scotland

Fraser Aird scored his first international goal in Canada’s 1:1 away draw at Scotland. The Scarborough, Ontario midfielder opened the scoring in the 11th minute before Steven Naismith equalised for the hosts in the 35th minute of the 22 March Men’s International Friendly match in Edinburgh.

It was a positive performance for the boys in red as they continue to build towards this summer’s 2017 CONCACAF Gold Cup. Canada Soccer’s Men’s National Team now has eight wins, five draws, and six losses in 19 international matches since the last edition in 2015. Canada are undefeated this year with a win and a draw.

“You want to win games and I think we had an opportunity to win this game, but it wasn’t to be,” said Michael Findlay, Canada Soccer’s Men’s National Team Interim Head Coach. “We were still very pleased with the performance given the short period of time that we were together. I think we had sections of the game where we displayed our qualities and our abilities at this level, so that is a very positive situation for the players and the program and moving forward.”

Junior Hoilett and Maxim Tissot were instrumental down the left side in setting up the play for Aird, who ultimately capitalised on a Scottish misclearance from inside the box. Aird was buzzing throughout the match and had another big chance tipped over the bar by the Scottish goalkeeper Allan McGregor in the second half.

“I’m delighted,” said Aird, Canada Soccer’s man of the match. “To play for your country is amazing and to get a chance to score my first goal for the country is just amazing. If it wasn’t for (McGregor) in goal, I probably should have had another one.“

“I thought our boys were excellent,” said Aird. “Every man to a man was brilliant and the coaching staff have to be happy with us. We can only take positives out of this game.”

Fraser Aird: “Delighted…a chance to play for your country is amazing and to get a chance to score my 1st goal for Canada is just amazing.” pic.twitter.com/M2aFZeM2hk

“The mental side of the game is coming,” said Scott Arfield, who grew up in Scotland before making his international debut for Canada in 2016. “We are starting to believe how good we are, so from a performance like that we are only going to better.”

Canada Soccer’s Men’s National Team Program is currently preparing for the 2017 CONCACAF Gold Cup, which runs 7 to 26 July across 13 venues in USA. Taking place every two years, the CONCACAF Gold Cup is the official national team championship of North America, Central America and the Caribbean. Drawing large crowds and millions of television viewers from across the region, the Gold Cup is a celebration of soccer, sportsmanship, and culture.

CANADA IN MONTRÉAL
Already on the calendar for the next international window, Canada’s upcoming home match is Tuesday 13 June at Stade Saputo in Montréal. The match will feature Canada against Curaçao, two nations preparing for this summer’s CONCACAF Gold Cup.

Canada Soccer’s Men’s National Team will play in Montreal this June ahead of the @GoldCup https://t.co/iUfgjqUu2t pic.twitter.com/63AF2obztL

Tickets for the Canada v Curaçao match will go on sale on Wednesday 29 March at 10.00 local time via canadasoccer.com (10.00 ET / 07.00 PT). The launch of ticket sales will be preceded by a pre-sale for Canada Soccer Insiders, and past purchasers of Canadian National Team matches. Fans interested in receiving access to the presale offer for these matches are encouraged to subscribe to the #CanadaRED newsletter via canadasoccer.com. Tickets start at just $20 and have been priced to ensure that the match is accessible for all members of the Canadian soccer community.