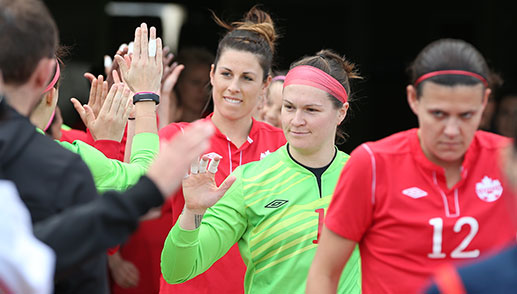 In most tournaments, six points in three group stage games would get a team into the knockout rounds.

But with the unique structure of the 2014 Cyprus Cup, Canada’s Women’s National Team will play the Republic of Ireland for fifth place on Wednesday afternoon at the GSP Stadium in Nicosia, CYP.

Canada finished second in group A with six points and since Scotland finished with seven points in group B, they’ll play for third, which means Canada plays the second place in group C—a group of teams not playing for the Cyprus Cup title and are more of a development group.

Moving past the potential confusion of the logistics, Canada will be against an Irish team that has made big steps forward recently and haven’t been beaten in three games in the tournament.

“The Irish have beaten the Swiss, drawn with New Zealand and drawn with Korea (Republic) so they’re certainly no slouches and from the footage we’ve seen they’re going to cause us some problems,” said Head Coach John Herdman. “I think people felt a bit sick last night and this morning, they’re just gutted we couldn’t do it against England but we’ve learned a little bit from that.”

Ireland will likely feature a young team but one that’s coming in on form having gone unbeaten in seven games and have lost just once in their last 11.

They’ve achieved seven out of a possible nine points in Group 1 of qualifying for the FIFA Women’s World Cup Canada 2015™. Any team riding a wave of confidence certainly cannot be overlooked.

“We have to do Canada justice and beat the Irish as everyone expects,” said Herdman. “This is a game that we may face in a World Cup when in one of our group games or in a knockout game you’re playing a team that’s seen as an underdog so we’ve just got to learn to be ruthless in that game.”