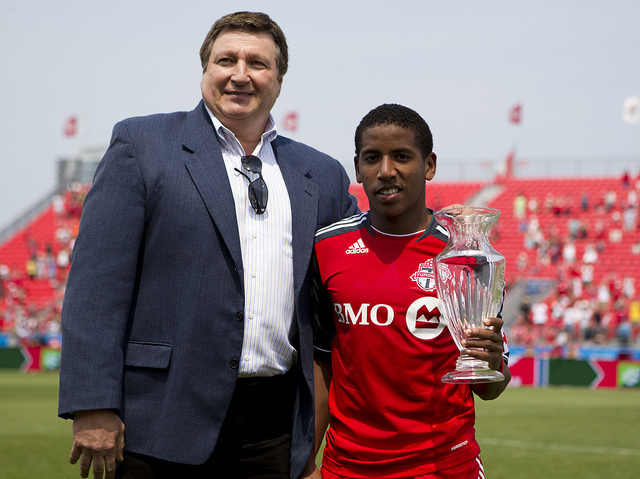 Plata was the most recent recipient of Amway Canadian Championship MVP award.

The George Gross Memorial Trophy is awarded annually to the most valuable player of the Amway Canadian Championship. The award will again be presented at the conclusion of this year’s competition, which runs 2-23 May 2012 on four consecutive Wednesday nights.

In four previous editions of the Amway Canadian Championship, three players have won the MVP prize. In 2008, it was goalkeeper Matt Jordan of the champion Impact Montréal. From 2009 to 2011, the trophy was awarded to Toronto FC footballers, with Dwayne De Rosario winning it in back-to-back years before Joao Plata captured the prize in 2011.

MATT JORDAN in 2008
Goalkeeper Matt Jordan of Impact Montréal was the George Gross Trophy winner at the end of the 2008 Amway Canadian Championship. He posted two clean sheets in four matches, both in back-to-back 2:0 victories over Vancouver Whitecaps FC (one at home and one on the road). He played in all four Montréal matches, helping his team post two wins, one draw and one loss to finish first overall in the (then) three-team competition.

On 22 July 2008, Jordan was instrumental in Montréal’s 1:1 draw with Toronto FC at BMO Field. A Toronto victory would have clinched the Championship in Toronto FC’s favour, but Jordan and his stingy defence would have none of that. After going down a goal in the 15th minute (Rohan Ricketts for Toronto FC), the Impact equalised in the 26th minute (Roberto Brown). Despite numerous chances in the last 65 or so minutes, Jordan would not concede again as Montréal won the Voyageurs Cup in the inaugural Amway Canadian Championship.

DWAYNE DE ROSARIO in 2009
Needing not only a win, but a win by a four-goal spread, Toronto FC went to work on a rainy 18 June 2009 at Stade Saputo in Montréal. After going down a goal on a penalty, the improbable task became five goals in a 65-minute window, a feat that on most days was not going to happen. The challenge, however, was taken by Toronto FC captain Dwayne De Rosario who proceeded to score three unanswered goals – two before the break and then a third early in the second half. The goal-scoring explosion ignited the Toronto team as it began to dance around an unmatched Montréal team.

Following De Rosario’s lead, Toronto FC scored three more times in the second half, enough to overtake the Whitecaps in the standings and win the Voyageurs Cup. The Scarborough-born De Rosario was named MVP of the Championship.

DWAYNE DE ROSARIO in 2010
For the second year in a row, Dwayne De Rosario won the George Gross Trophy as the MVP of the Amway Canadian Championship. This time, he scored a goal and an assist in four matches as Toronto FC defended its Voyageurs Cup title and qualified for CONCACAF Champions League. De Rosario won Man of the Match honours in Toronto FC’s first three matches. He recorded an assist in the opening 2:0 win at BMO Field and then scored a goal in the 1:0 return leg at Stade Saputo. He was also the Man of the Match in Toronto’s away 0:0 draw with Vancouver.

JOAO PLATA in 2011
Joao Plata brought his A-game to the pitch on 2 July 2011 for the second leg of the Amway Canadian Championship final. In the first year of the competition’s new format (a semi-final-then-final format), Toronto FC and Vancouver Whitecaps FC kicked off at BMO Field in a winner-takes-all championship match. The two sides had drawn 1:1 in the opening leg in Vancouver, but then the second leg on 25 May was abandoned because of lightning and the resulting unplayable field conditions because of heavy rain.

Down 0-1 after 45 minutes in the rescheduled 2 July final, Plata scored on a penalty in the 51st minute and then assisted on the winning goal in the 61st minute, feeding Mikael Yourassowsky for an easy tap in to give Toronto the 2-1 lead. Toronto FC went on to win its third consecutive Voyageurs Cup with teenaged striker Joao Plata the MVP.