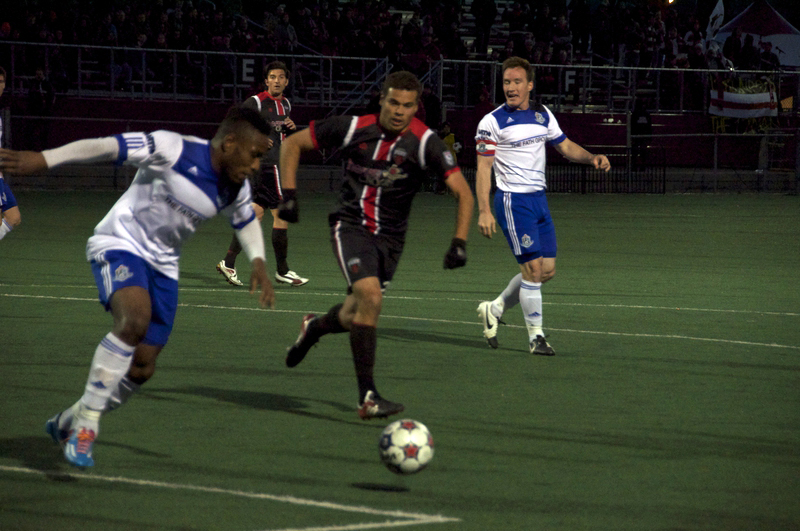 Gorrick saves the day for Ottawa in dying moments

The scoreless first leg sets the stage for an entertaining finish, as both teams had chances to win the first leg.

Another passionate crowd filled the seats at Carleton University’s Keith Harris Stadium as hometown club Ottawa Fury FC made history for the second consecutive match, making their Amway Canadian Championship debut against fellow NASL outfit FC Edmonton. Both teams were looking to bounce back in the domestic cup match after dropping their respective NASL home openers on Saturday. The match was an absolute thriller, with chances at both ends and bookings aplenty.

The hosts had the first offensive breakthrough of the match in the 2nd minute, when striker Vini Dantas’ run was stopped in its tracks by Edmonton FC skipper Albert Watson, resulting in a Fury FC corner kick. The in-swinging corner was consequently punched to safety by Eddies ‘keeper John Smits.

Ottawa nearly opened the scoring in the 7th minute, when Philippe Davies snapped a crisp header towards goal, forcing Smits to come up with a quality save.

Only a minute later, the injury bug seemed to strike the already injury-riddled Fury again, as midfield maestro and captain Richie Ryan hit the turf hard and stayed down for some time after an aerial challenge on FC Edmonton striker Tomi Ameobi. After some help from the Fury FC training staff, Ryan rose to a hearty round of applause from the home supporters and was able to continue.

The Eddies had their first half-chance of the match in the 13th minute, when Ameobi launched a speculative effort from 25 yards out into the evening sky, well over the Fury net.

The frenetic pace continued, as Ottawa came storming back in the 14th minute, with Philippe Davies curled a long shot towards the FC Edmonton net after a slick passing exchange with Pierre-Rudolph Mayard. Smits again proved up to the task, easily diving to deny the Fury FC winger.

FC Edmonton enjoyed some offensive pressure of their own, as Neil Hlavaty’s 18th minute free kick from the left side bounced around the Fury FC 18-yard box, only to be eventually cleared to safety by defender Drew Beckie.

Fury FC surged up the left flank in the 25th minute, with P.R. Mayard’s energetic run resulting in a corner for the hosts, which was cleared by FC Edmonton defender Kareem Moses.

Philippe Davies continued to sprint up and down the right flank, narrowly missing high on a volleyed effort in the 27th minute.

In keeping with the game’s frantic back-and-forth action, Daryl Fordyce floated a dangerous cross into the Fury FC 18-yard box in the 29th minute, but it sailed over the heads of all five players that went up for it.

Northern Ireland native Darryl Fordyce nearly broke the deadlock in favor of the visitors in the 31st minute, when his curled right-foot effort was stopped well by Fury FC keeper Devala Gorrick.

The game picked up intensity, as Fury FC defender Drew Beckie was shown a yellow card in the 33rd minute for a rough tackle in the midfield.

Colin Miller’s men really began to press the hosts as the first half progressed, as Hanson Boakai and Tomi Ameobi repeatedly created chances. The Eddies thought they had won a penalty in the 35th minute, but their calls for a hand ball inside the Ottawa 18-yard box went unheeded by the referee Geoff Gamble.

Typical of the match, the hosts rushed back into the Edmonton half, with attacking midfielder Oliver’s 39th minute headed effort missing just wide of the Edmonton net.

The opening half closed with the clubs still tied at zero despite a multitude of chances at both ends of the pitch.

Neither team made any changes at halftime, and the Fury FC got the second half underway amidst a large cheer from the soccer-hungry fans packed into Keith Harris Stadium.

Fury FC striker Vini Dantas deservingly picked up the third yellow card of the match in the 51st minute, when he made a clumsy tackle in the midfield.

English midfielder Ritchie Jones created the Eddies’ first chance of the second half on fifty-three minutes, when the former Hartlepool United man sent a rocket towards the Fury FC goal from 25 yards out, forcing Fury FC ‘keeper Devala Gorrick to make a moderately difficult stop.

Looking to inject some pace up front, Ottawa manager Marc Dos Santos opted to make the first substitution of the match in the 58th minute, bringing on agile striker Carl Haworth for Vini Dantas.

The visitors tested Gorrick again in the 60th minute, when Michael Nonni cut to the middle of the pitch before curling a shot towards the far post. Gorrick yet again proved he was up to the task, and the hosts survived a scare.

Eddies manager Colin Miller then countered Ottawa’s substitution with one of his own in the 61st minute, lifting Daryl Fordyce from the match in favor of Frank Jonke.

Miller then used his second subtstitution for FC Edmonton in the 64th minute, bringing on Horace James for Ottawa native Eddie Edward. Michael Nonni dropped back to right back, while James assumed a more attacking position on the right wing. The visitors were certainly not going to finish the final twenty-five minutes of the match playing for the draw.

The hosts nearly poached a goal in the 67th minute, when a mad scramble in front of the FC Edmonton goal resulted in a narrow miss off the boot of Mason Trafford.

Moments later, the match’s intensity exploded, as players congregated, exchanged pleasantries, and eventually were separated by the officials. The only disciplinary action to come out of the ‘gentleman’s scrum’ was a yellow card to Fury FC winger Philippe Davies.

The match continued to angrily boil over, as Tomi Ameobi picked up a yellow card for the visitors in the 72nd minute.

The hosts nearly broke through the Eddies’ defence, as Maykon’s centering effort for Philippe Davies was blocked well-blocked in the 79th minute by Michael Nonni.

Pierre-Rudolph Mayard continued to be active in the match, picking up a yellow card of his own in the 80th minute.

Drew Beckie made a game-saving tackle in the 85th minute for the hosts, as FC Edmonton substitute Frank Jonke seemed to have broken through alone on goal, only to be dispossessed by an excellent last-ditch tackle from Beckie.

Colin Miller’s squad continued to press in the hope of poaching an away goal, as Neil Hlavaty’s 87th minute free kick was well-blocked by Fury FC captain Richie Ryan.

The hosts’ last offensive gasp came in the 90th, as a long throw-in floated to the edge of the FC Edmonton 18-yard box, where Maykon hit the ball flush, sending it way wide.

Deep in extra time, Eddies substitute Frank Jonke nearly poached a last-minute goal for the visitors, firing an absolute cracker towards the Fury FC net, forcing ‘keeper Devala Gorrick to make the save of the match to preserve the draw for Ottawa.

Jonke’s effort would turn out to be the final true scoring chance of the match, as the referee blew his whistle to signal full time after approximately 93 minutes of dynamic, exciting soccer in the Canadian capital.

The scoreless first leg sets the stage for an entertaining finish, as both teams had chances to win the first leg.

For Colin Miller’s FC Edmonton side, a scoreless draw is not a poor result away from home. There were plenty of positives for the visitors, including forward Tomi Ameobi’s energetic performance and John Smits’ quality performance in goal for the Eddies. The visitors outshot Fury FC 11-7 on the evening, and outpossessed Fury FC 56-44, coming on stronger as the match progressed.

“Very pleased with the performance, it was as well as we’ve played all season. I thought overall we were the better side, and I can’t fault the lads’ work rate,” commented FC Edmonton manager Colin Miller. When asked about the brisk weather conditions, Miller quipped, “It’s perfect for a Glasgow barbecue!”

As for Fury FC, Marc Dos Santos must be happy with the fact that his side did not give up a crucial away goal. Wednesday’s match marks the first competitive points gained in the club’s short history. There were positives aplenty for Fury FC as well, with P.R. Mayard, Drew Beckie , and Philippe Davies all excelling for the hosts in their Amway Canadian Championship debut.

“We created a lot of chances early on, but FC Edmonton certainly came on and we had a lot of trouble especially in the first twenty-five minutes of the second half. Our goalkeeper made a huge save, and it would have been unfair if Edmonton won,” commented Fury FC manager Marc Dos Santos. “We have a lot of guys on this team that can play, when other guys are injured. We showed that today, Drew (Beckie) had an excellent game at centre back, Andres (Fresenga) was very good as well.”