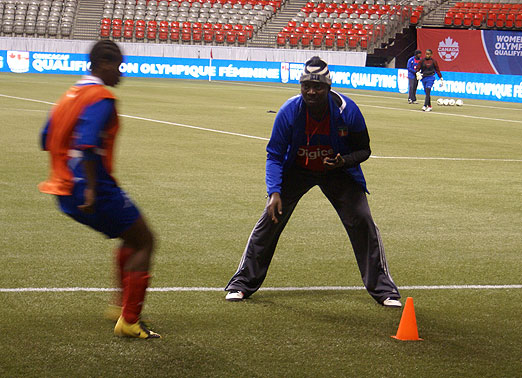 Canada to face Haiti, Cuba and Costa Rica in Group A action.

Haitian women’s head coach Ronald Luxieux believes his team has a chance to reach the London 2012 Olympics. To do so, his team would have to play its very best in the group phase and then hopefully avoid world silver medalist USA in the deciding semi-final phase. Haiti does not have the experience of group opponent Canada or opposite group favourites USA and Mexico, but it does have the conviction of a nation that loves its football.

Even to reach the semi-final stage, Haiti would equal its best performance at a CONCACAF women’s tournament, a fourth-place finish back in 1991 when the inaugural CONCACAF / FIFA Women’s World Cup Qualifiers were held in Port-au-Prince, Haiti.

At the 2010 CONCACAF / FIFA Women’s World Cup Qualifiers, Haiti finished sixth out of eight teams. After an 0:5 loss to USA, it lost 0:3 to fourth-place Costa Rica before winning 1:0 over seventh-place Guatemala. Striker Adeline Saintilmond scored Haiti’s lone goal in the win.

Costa Rica is surely Haiti’s toughest opponent beyond Canada in the group phase. The Haiti-Costa Rica match will be played on 21 January, the second match day for Group A action. Costa Rica is surely the favourite after finishing fourth in four of the past five CONCACAF women’s competitions.

The Haitian women’s program did, however, get a vote of confidence early this year when it qualified for the CONCACAF Women’s Under-20 Championship for the first time in 10 years. Costa Rica, on the other hand, did not qualify for the youth confederation championship for players born 1992 or later.

Beyond Canada, Costa Rica and Haiti, the fourth Group A team is Cuba, a first-time participant in a CONCACAF women’s competition. Cuba has reached the final eight for each of the past three CONCACAF Women’s Under-20 Championships (2008, 2010 and upcoming 2012), so the country’s entry to the “A” category should prove to be beneficial for the young women’s program. More than half of the Cuban “A” roster in Vancouver participated in one of those previous CONCACAF women’s youth championships.