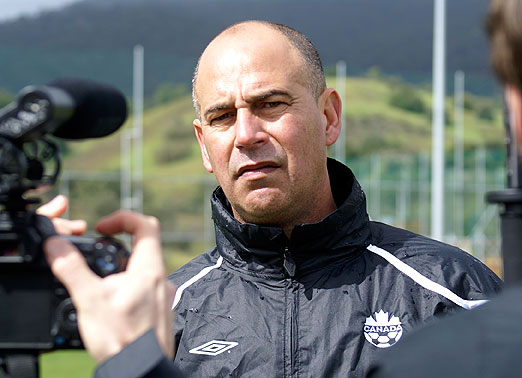 Canadian national head coach Stephen Hart spoke to media on 28 February on the eve of his Men’s International Friendly match against Armenia in Limassol, Cyprus. Hart spoke to media in the morning after training and in the evening via a conference call with national media back home in Canada. Hart had good things to stay about his team’s 28 February training session and underlined again the importance of playing on FIFA International Dates in 2012.

Players were given but a short 48-hour window of release from their professional clubs in Europe. Some players played with their clubs as recently as Sunday 26 February and only arrived into Canadian uniform on Tuesday 28 February.

Also on Tuesday 28 February, head coach Hart had the opportunity to watch Armenia in action in a Men’s International Friendly match against Serbia. With 31 players in camp, Armenia’s head coach Vardan Minasyan is expected to feature different players in each of the back-to-back matches against Serbia (28 February) and Canada (29 February).

“Armenia is an attacking-oriented team and they love to come forward,” said Hart. “That is good for us because that is the (style) we will face when we are away from home. I don’t expect them to play any different against us.”

The Armenia side lost 0:2 to Serbia on 28 February.

“It was a bit of a game of two halves, as Armenia put Serbia under lots of pressure in the second half. They came forward lots… They were very dynamic. They play on the ground, they play quickly and they play very similar to a latin style of play.”

Fans will be able to track the progress of Canada’s national teams throughout the 2012 season via CanadaSoccer.com, as well as social media platforms on Twitter @CanadaSoccerEN, Facebook, Flickr and CanadaSoccerTV.