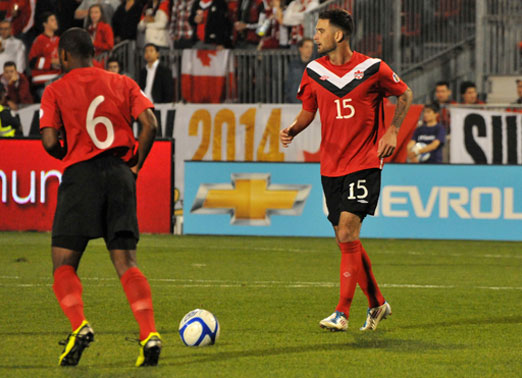 Seventeen players called in for friendly on 29 February 2012.

Canada’s head coach Stephen Hart has announced his roster for the upcoming Men’s International Friendly match against Armenia on 29 February 2012. Hart has selected 17 players for the match, which falls on the first FIFA International Date of the 2012 calendar year. The Canada-Armenia match will be played in Limassol, Cyprus.

With only a short training window before the 29 February match, Hart has selected 15 players currently in season with professional clubs in Europe. Kevin McKenna and Atiba Hutchinson are the two most experienced players in the group, with the latter having only recently made his return to the first team following recovery from an injury. The third-most experienced player on the team is Julian de Guzman from Canadian club Toronto FC.

The one newcomer to the club is 17-year old midfielder Samuel Piette, who plays his professional soccer with FC Metz in France. Piette already has more than 100 days in Canadian national youth camps over the last two seasons, but this is his first call up to a national “A” camp with head coach Hart. Last year, Piette represented Canada at the FIFA U-17 World Cup Mexico 2011.

The 29 February match will also feature the debut of Canada’s new 2012 Umbro kits, the same ones previewed earlier this month at the Umbro Canada Kit launch on 2 February in Toronto.