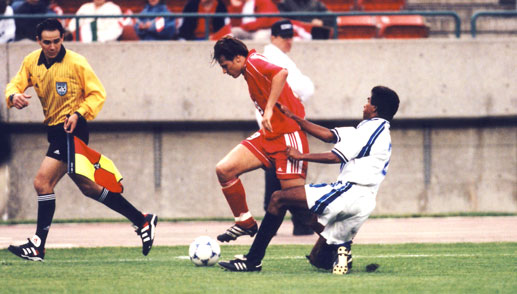 At the Sports Officials Canada Hall of Fame Dinner presented on Saturday 21 September 2013, Sports Officials Canada will present the Ron Foxcroft Award for Professional Excellence to Héctor Vergara. Although born in San Javier, Chile, Vergara grew up in Winnipeg, MB. Vergara played soccer competitively for 10 years and recreationally for 30 years and began working as a referee in 1983. Vergara has become one of the most prolific – and well-respected – referees in Canada.

He retired as a FIFA Assistant Referee effective November 12, 2011, the day after his last FIFA international appointment. He was part of the full Canadian crew that took take charge of the FIFA World Cup Qualifying match between the US Virgin Islands and Curaçao on November 11, 2011 in Frederiksted, US Virgin Islands.

He spent 19 years on the FIFA list and was involved in 11 FIFA competitions. Three of those competitions were FIFA World Cups (2002, 2006 and 2010). Vergara claimed the record for most World Cup games as a referee/assistant referee (14) when he took the field July 10, 2010 in the third-place play-off match between Uruguay and Germany at Port Elizabeth Stadium. His amazing World Cup appointments included two 3rd placed matches (2002 & 2010) as well as the Germany – Italy Semi-Final in 2006.

In 2012, he was appointed by FIFA to its Referees’ Committee as a Development Member.