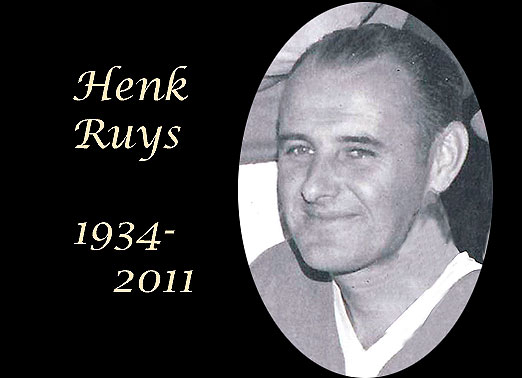 Henk Ruys, a former player, coach, official and administrator, was remembered in a special life celebration event in Saskatoon, SK on 8 January 2012. The event took place at the Saskatoon Kinsmen / Henk Ruys Soccer Centre starting at 13.00 local. Ruys, a longtime Saskatchewan resident, passed away at age 77 on 14 December 2011.

Ruys is an honoured member of both the Saskatchewan Hall of Fame (1986) and Saskatoon Hall of Fame (1990), in both cases inducted as a builder for his work at both the provincial and municipal level. A secretary-treasurer with the Saskatchewan Soccer Association from 1967 to 1982, he was present at the founding meeting of the Canadian Minor Soccer Association in 1969.

Ruys was a footballer in the 1960s and 1970s, playing for clubs including Saskatoon Hollandia and Saskatoon Internationals. He won the Saskatchewan Shield provincial championship with the Internationals. In 1980, he was a winner of the Kinsmen Sportsman of the Year award. In 1998, the The Saskatoon Kinsmen / Henk Ruys Soccer Centre was named in his honour.

Hendrikus Adrianus Ruys (Ruijs) was born on 27 January 1934 in Veghel, Netherlands. He and his wife-to-be Henrica (Riek) emigrated to Birch Hills, SK in January 1957 and were married later that year in Saskatoon. He spent 37 years in the province of Saskatchewan, 34 of which were spent as a firefighter. After his retirement in 1994, he moved with his wife to Port Moody, BC. Henk leaves behind his wife of 54 years, four children, and 11 grandchildren.