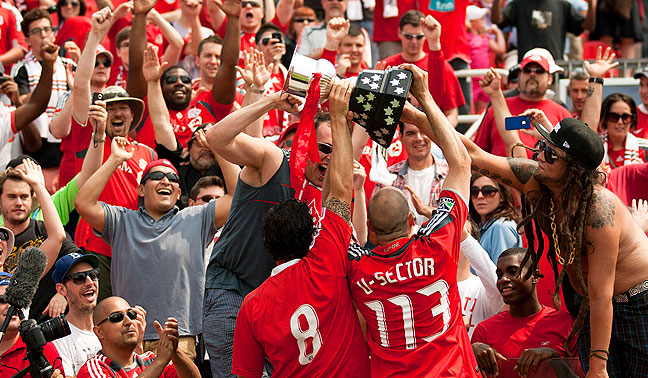 Four venues to be used for 2012 Amway Canadian Championship.

With just under a month until the competition renews, Canadian fans can’t wait for the opening Wednesday semi-final fixtures in the 2012 Amway Canadian Championship. Just last year, the Championship drew its best average attendance – 13,737 fans per match in six matches, which marked a 15% improvement over the inaugural campaign in 2008.

Including last year’s totals, the Amway Canadian Championship has averaged 12,267 fans per match (24 matches in four years). Under the competition’s revised semi-final-then-final format introduced in 2011 (as opposed to one round-robin phase), the first-ever final legs of the Championship drew 15,474 at Empire Field in Vancouver and 18,212 at BMO Field in Toronto. It was in front of a home crowd at BMO Field that Toronto FC won its third Voyageurs Cup in four years.

This year’s Championship will again be played in four venues, of which two are new to the competition. Below is a brief synopsis of the four stadiums Canada’s soccer teams will call “home” for the 2012 Amway Canadian Championship.

BC PLACE IN VANCOUVER, BC – HOME TO VANCOUVER WHITECAPS FC
BC Place is the new home to Vancouver Whitecaps FC, who actually moved into their venue at the end of the 2011 campaign. First completed in 1983, the downtown Vancouver stadium was revitalized in 2011. In January of this year, the 2012 CONCACAF Women’s Olympic Qualifying tournament was the first international soccer stadium played at the new BC Place. On 9 May 2012, BC Place will host its first Amway Canadian Championship match when Whitecaps FC face FC Edmonton.

Since 2008, Vancouver Whitecaps FC have posted two wins, four draws and two losses at home (not counting an extra-time win to knock off the Impact in the semi-final last year). From 2008 to 2010, the Whitecaps played at Swangard Stadium in Burnaby, BC; in 2011, the team played at Empire Field. Overall, the Whitecaps’ Amway Canadian Championship record is five wins, six draws and five losses.

In FC Edmonton’s first year in the Championship, the team hosted both matches to three-time champion Toronto FC. In 2012, FC Edmonton will face Vancouver Whitecaps FC in a home-and-away series, with the first match on 2 May at Commonwealth Stadium in Edmonton.

BMO FIELD IN TORONTO, ON – HOME TO TORONTO FC
BMO Field was inaugurated in 2007 and has been home to Toronto FC since the franchise joined Major League Soccer. The stadium has hosted FIFA World Cup Qualifiers (2008-2012), the FIFA U-20 World Cup (Canada 2007), and CONCACAF Champions League matches (2009-2012). The downtown Toronto stadium has also hosted all of Toronto FC’s Amway Canadian Championship matches.

Since 2008, Toronto FC has posted five wins, two draws and one loss in eight Championship matches. Its only home defeat was a 2008 Canada Day 0:1 loss to Whitecaps FC. Toronto fans also witnessed Montréal win the Championship in 2008, but then celebrated Toronto’s Championship in 2010 (after it was mathematically secured one week earlier). In 2011, Toronto FC won its third Voyageurs Cup with home field advantage at BMO Field. Overall, Toronto FC’s Amway Canadian Championship record is nine wins, five draws and two losses. Toronto has participated in each of the past three editions of CONCACAF Champions League (2009-10, 2010-11 and 2011-12).

STADE OLYMPIQUE IN MONTRÉAL, QC – HOME TO IMPACT MONTRÉAL
With Stade Saputo being renovated for the Impact’s debut season in Major League Soccer, the one-time Canadian champions have begun their 2012 campaign next door at Stade Olympique (Olympic Stadium). Opened for the Montréal 1976 Olympics, the stadium has hosted the Men’s Olympic Football Tournament (Montréal 1976), the FIFA U-20 World Cup (Canada 2007), and CONCACAF Champions League (2008-09). On 2 May 2012, it will host its first-ever Amway Canadian Championship match when the Impact host Toronto FC.

Since 2008, the Impact have posted one win, one draw and five losses at Stade Saputo in the Amway Canadian Championship. Overall, the Impact’s Championship record is three wins, three draws and eight losses. The Impact were, however, Canada’s first champions in 2008, going on to reach the quarter-final phase of 2008-09 CONCACAF Champions League.