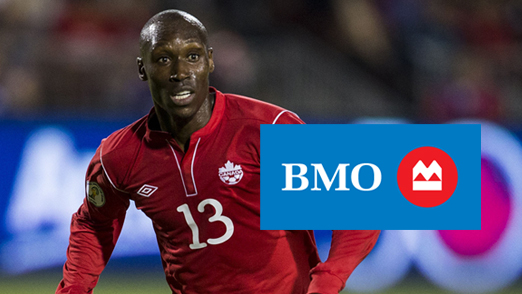 The Canadian Soccer Association announced that Atiba Hutchinson is the male selection for the 2012 BMO Canadian Players of the Year award. Hutchinson of Brampton, ON was honoured in a vote shared by Canadian media (50%) and Canadian coaches (50%).

Hutchinson is one of two winners of the 2012 BMO Canadian Players of the Year award. His co-winner Christine Sinclair was recognised via CanadaSoccer.com on Tuesday 11 December.

“BMO is proud to recognize players such as Atiba Hutchinson, whose impact on the landscape of Canadian soccer has proven to be outstanding and inspirational,” said Justine Fedak, Senior Vice-President, Branding, Advertising & Sponsorships, BMO Financial Group. “With his contributions to both the Canadian Men’s National Team and PSV Eindhoven, Atiba Hutchinson has demonstrated that he is truly one of the best in the sport and we are honoured to present him with the 2012 BMO Canadian Players of the Year Award.”

In 2012, Hutchinson was a leader for both club and country, returning to full form after injuries kept him out of the lineup for stretches in 2011. He made seven international appearances for Canada and 43 appearances for PSV Eindhoven including matches in the Dutch Eredivisie and UEFA Europa League.

In the CONCACAF 3rd Round of 2014 FIFA World Cup Brazil Qualifiers, he helped Canada post an impressive 10 points, ultimately missing a spot in the Final Round by a single point. Hutchinson had an assist in a 1:0 win over Panama at home. Of note, Canada went undefeated at home for the second year in a row.

In the second half of the 2011-12 Dutch season, Hutchinson helped PSV Eindhoven finish third in the league standings (Eredivisie), narrowly missing out on a spot in UEFA Champions League despite ending the campaign with five-straight wins.

Now in 2012-13, Hutchinson has PSV Eindhoven in first place in the standings, pushing for a league title for the first time in five years. thus fighting for a spot in UEFA Champions League. In 16 league matches, he has two goals and three assists.

In 2012, Hutchinson won Canada Soccer Player of the Month honours in both April and October. He is now a two-time winner of the BMO Canadian Players of the Year award, having previously won the title in 2010.