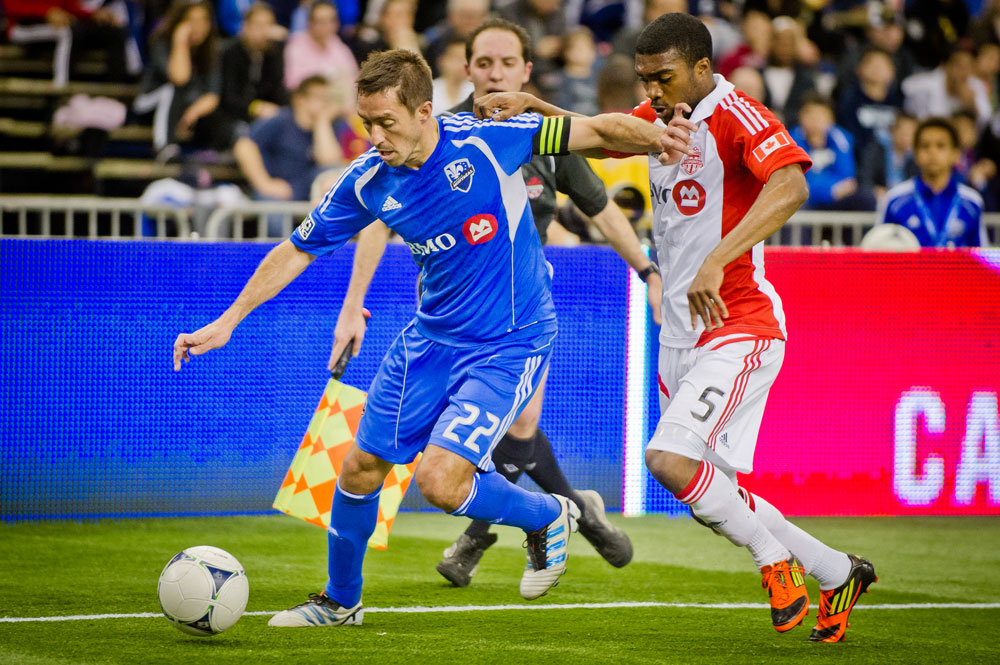 Impact, Toronto FC scoreless at Stade Olympique on 2 May

Impact Montréal and Toronto FC played to a 0:0 draw in the opening leg of the 2012 Amway Canadian Championship semi-final series. Despite creating chances and dominating the possession for good portions of the match, the Impact could not break the visitor’s backline.

Although no goals were scored in the first half, three good chances were created by the home side in the second half of the first 45 minutes. In the 27th minute, a Shavar Thomas header was just cleared off the line by Toronto FC’s Reggie Lambe. That chance came off a corner kick. Then in the 35th minute, a Jeb Brovsky kick was headed on target by Bernardo Corradi. Toronto FC goalkeeper Milos Kočić just tipped the ball over the crossbar.

In the 42nd minute, Brovsky made a good cross, but Davy Arnaud could not connect in the Impact’s favour.

The Impact continued to press early in the second half, but no matter what they tried their opponent held strong. In the 66th minute, the Impact thought theyhad broken through, but a play was called offside before Sanna Nyassi could hit the back of the net.

In the second half, coach Jesse Marsch replaced Neagle with Sinisa Ubiparipovic (71′), Corradi with Eduardo Sebrango (82′), and Martens with Justin Braun (86′).

In the second half, coach Aron Winter replaced Avila with Luis Silva (60′), Lambe with Richard Eckersley (73′), and Dunfield with Logan Emory (90+1′).

The 2 May match was played at Stade Olympique in front of 13,405 fans, a new attendance high for a Canadian Championship match in Montréal.

This year marks the fifth edition of the Amway Canadian Championship. Six matches will be played over four Wednesday night-final series on 2 and 9 May and the championship final series on 16 and 23 May. The four competing teams are Toronto FC, Vancouver Whitecaps FC, FC Edmonton and Impact Montréal.