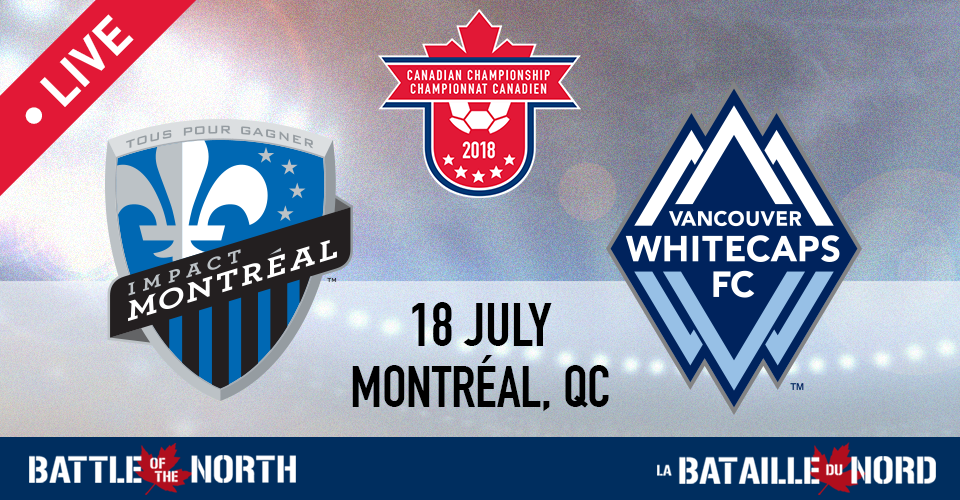 Impact earns 1:0 victory over Whitecaps in 2018 Canadian Championship Semi-Final Round

Uruguayan Alejandro Silva celebrated his first game in the Canadian Championship with a goal in the 58th minute to lead the Montreal Impact to a 1-0 victory over the Vancouver Whitecaps on Wednesday night, in the first leg of their home-and-away semifinal matchup at Saputo Stadium in Montreal, Quebec.

The win extends Montreal’s undefeated sequence at home in Canadian Championship play to 11 games (6-0-5) since 2012, but mostly, it gave the guys in « Noir et Bleu » a lead without surrendering a single away goal to the Caps ahead of the second leg of their series, next week in British Columbia.

Silva had one of the opening chances to put his team ahead in the 11th minute when he found a lane to shoot at goal from the top of Vancouver’s box, but keeper Stefan Marinovic was keen and solid to shut the door down low on the short side.

The striker found the back of the net just before the hour of play, following on his charge in the middle to accept a back pass from Saphir Taider who selflessly decided to go back to his team mate instead of attacking the net himself from inside the box on the left. Silva’s shot was decisive in the bottom right corner to put the hosts up on the board.

Canadian international Anthony Jackson-Hamel had a frustrating night hitting the posts twice, including in the 24th minute when he headed a well-placed pass from Daniel Lovitz close to the penalty point. The ball had beaten Vancouver’s goalkeeper, but struck the woodwork before bouncing out of danger.

In the 62nd minute, Jackson-Hamel had an opportunity to double his team’s lead after creating some space just outside of the box, but his quick shot sent the ball off the crossbar.

Vancouver also hit the post on what appeared to be a cross, but the ball ended up hitting the second post, to the great relief of the local fans.

Otherwise, the visitors’ chances were few and far between. Nicolas Mezquida could have opened the score at the 52nd minute when the Caps were awarded a free-kick right in the middle and just outside of Montreal’s box. The hard shot missed the goal to the right.

The last real threat from Vancouver came on another set play in the 64th minute when the ball directed in the box was headed just over the crossbar.

Montreal ended the game with 13 shots, but only four on goal against nine shots for Vancouver, one on goal.

Montreal head coach Remi Garde started the game with Clement Diop in goal, behind central defenders Rudy Camacho and Victor Cabrera, Daniel Lovitz as left back and Canadian international Michael Petrasso on the right. In the midfield, Saphir Taïder, Canadian international and team captain Samuel Piette and Ken Krolicki started from left to right. Up front, Alejandro Silva on the right and Jeisson Vargas to the left supported Anthony Jackson-Hamel.

An injury in the 38th minute forced Petrasso off the field in favour of Jukka Raitala. In the 71sth minute, Ignacio Piatti replace Jackson-Hamel, and Canadian youngster Mathieu Choiniere replace Taider in the 86th minute.

For Vancouver, Stefan Marinovic started in goal behind Bret Levins, Aaron Maund, Aly Ghazal and Jakob Nerwinski , from left to right on the backline. Brek Shea was on the right wing, Christian Techera on the left with the Canadian duo of David Norman and Russell Teibert in the middle of the field. Nicolas Mezquida and Anthony Blondell were the starting forwards.

The second leg of this semifinal series is scheduled for Wednesday, July 25 at BC Place in Vancouver at 10 p.m. ET / 7 p.m. PT and will be available on Canada Soccer’s website (www.canadasoccer.com).

The winner of that series will face the winner of the other semifinal between the two-time defending champions Toronto FC and the Ottawa Fury. The final will also be a home-and-away series on August 8 and 15 and will designate the Canadian representative to the 2019 Scotiabank Concacaf Champions League.