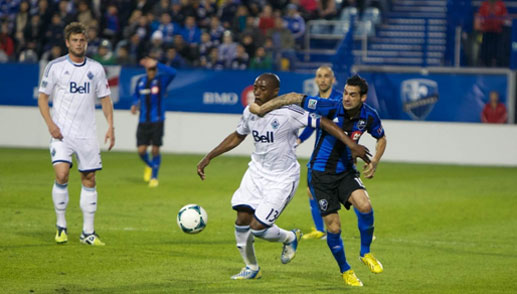 Teams to settle the final in second leg on 29 May in Vancouver.

The Amway Canadian Championship final will shift to the Pacific Coast for the second leg with the score locked at 0:0 after Montréal Impact and Vancouver Whitecaps FC battled to a scoreless draw at Stade Saputo in Montréal on Wednesday night.

Both teams exchanged decent chances in what was a tightly-contested affair – but neither team was able to find a goal to take an advantage into the second leg of the Championship final to take place at BC Place in Vancouver on Wednesday 29 May.

Patrice Bernier and Marco Di Vaio had chances to put the Impact ahead in the first half but neither could convert on sights at goal.

Whitecaps FC answered back with a pair of first-half chances when Alain Rochat and Andy O’Brien attempted to force home efforts from inside the area during a scramble off of a corer kick.

The second half saw the tight defensive play continue with neither team letting down its guard at the back.

Montreal’s best chance of the second half was blocked by Vancouver defender O’Brien after Jeb Brovsky had cut inside to set-up Di Vaio.

Neither team was able to carve out a clear-cut chance in the match’s dying stages and the teams will now head to Vancouver to dispute the final over the second leg.

Hassoun Camara received a yellow card in the 25th minute.

Andy O’Brien received a yellow card in the 49th minute.

At stake in the final of the Amway Canadian Championship is the right to hoist the Voyageurs Cup; as well as the chance to go on to be Canada’s lone representative in the 2013 / 2014 CONCACAF Champions League.