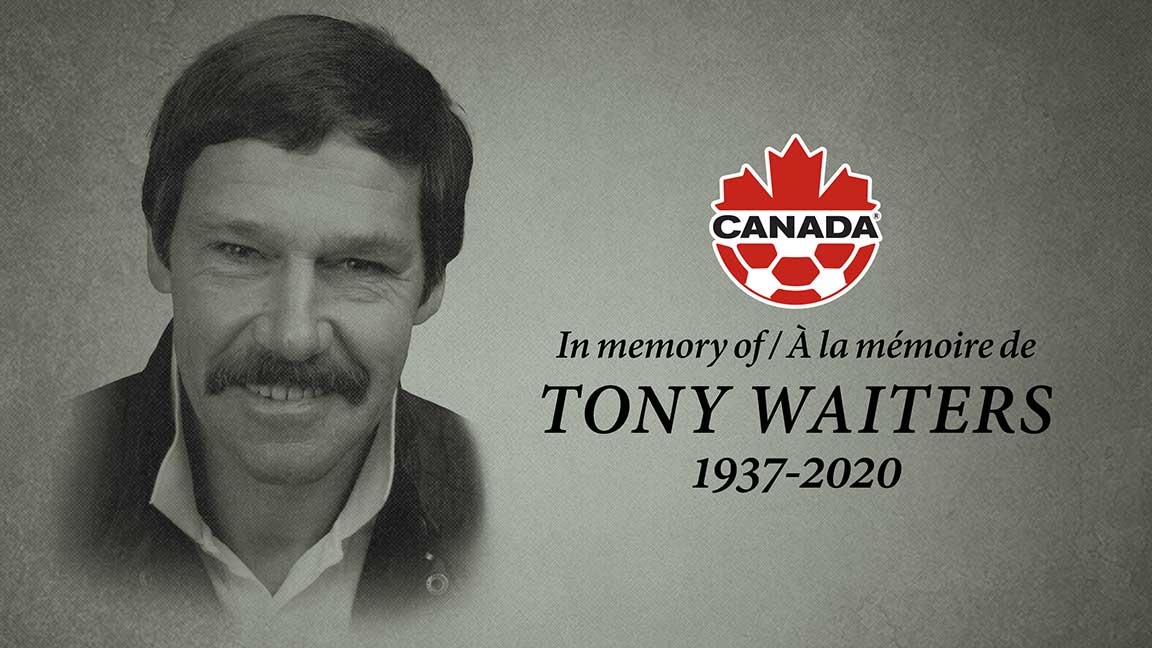 In memory of Tony Waiters, Hall of Fame honoured member

? Tony Waiters passed away at age 83

Tony Waiters, Canada Soccer’s Men’s National Team Head Coach that won a Concacaf Championship and took Canada to the 1986 FIFA World Cup, has passed away at age 83. The former English goalkeeper turned coach was both a Canada Soccer Hall of Fame honoured member and a Canada Soccer Life Member.

Hired as Head Coach and Manager on 4 December 1982, Waiters qualified Canada just 16 months later for the Los Angeles 1984 Men’s Olympic Football Tournament with a home draw in Victoria, British Columbia. Another four months later, Canada reached the Quarter-finals at the Olympic Games before they were eliminated on kicks from the penalty mark by Brazil.

On 14 September 1985, Waiters qualified Canada for their first FIFA World Cup in St. John’s, Newfoundland, also winning Canada their first Concacaf Championship with a famous 2:1 victory over Honduras at King George V Park. The following year, Canada was competitive at the FIFA World Cup in Mexico, but were ultimately eliminated after three successive losses to European sides, including a 1:0 loss to European champions France in the opening match.

Wrote Jim Fleming in 1985, Canada Soccer’s President at the time, Tony “was always well prepared for the task at hand and nothing appeared to worry him. His outward calm spread to his support staff and they were all organised in a very effective and efficient way.” As noted in the 1986 FIFA World Cup Official Report a year later, “there was no other team at this FIFA World Cup tournament with such a highly-developed feeling of solidarity.”

“He took players with varying styles and molded them into a unit that played the only type of game he knew would make Canada competitive on the world stage,” said Kevan Pipe in 1986, who at the time served as Canada Soccer’s General Secretary. “On 1 June, he and his team were 11 minutes, or one goal, away from the first upset of the 1986 FIFA World Cup.”

Before joining Canada, Waiters won North American Soccer League Coach of the Year honours in 1978 and then led Vancouver Whitecaps to the NASL Championship in 1979. Before moving to Canada, he coached England’s youth team and later Plymouth Argyle, earning the English club promotion to the second division after the 1974-75 season.

As a player, Waiters was an England international goalkeeper, having made five appearances for his National Team in 1964. At the club level, he most notably played for Blackpool FC, making more than 250 appearances after his debut on 26 December 1959. He also played for Bishop Auckland, Macclesfield Town and, after his time with Blackpool, Burnley FC. He also played for Loughborough College where he earned his Teacher’s Certificate in Physical Education. He earned his Football Association Coaching Preliminary Award in 1960 and his English FA Coaching Full Award in 1964.

Mr. Waiters leaves his wife Anne and children Scott and Victoria. Born 2 February 1937 in Southport, England, he passed away peacefully on 10 November 2020.