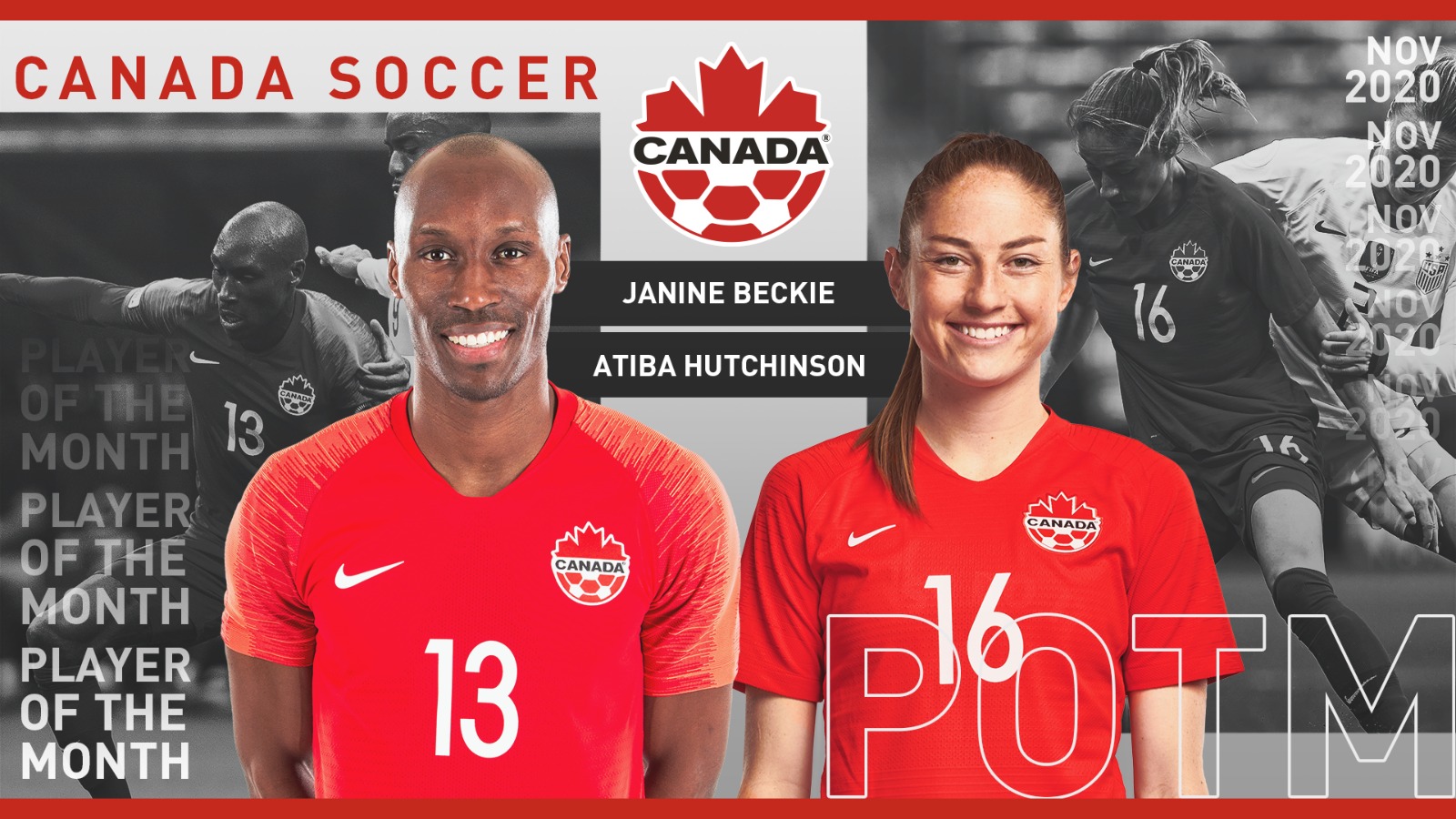 Janine Beckie and Atiba Hutchinson have been named Canada Soccer’s Players of the Month for November 2020. Beckie of Manchester City FC became the first Canadian to feature and score for an FA Cup-winning side while Hutchinson captained his side Beşiktaş JK back into contention in the Turkish SüperLig including an important win over rivals Fenerbahçe SK.

Beckie, who featured as a substitute in Manchester City’s 3:1 victory over Everton FC on 1 November at Wembley Stadium, scored the last goal of the match in extra time. She was the second Canadian to feature in an FA Cup Final (after Desiree Scott in 2015) and the first to score. In league action, she also featured in two matches in November before the international break, scoring her first goal of the season in a big win over Bristol City and then also featuring in the 2:2 draw against rivals Manchester United.

Hutchinson played every minute for Beşiktaş in November as the team won three of four matches including a big 4:3 away victory over Fenerbahçe, despite being reduced to 10 men. With the third-best record in the league over the last four matches, Beşiktaş have jumped up into fourth place in the league standings, now just four points back of third-place Fenerbahçe. Along the run, Hutchinson also scored a goal and an assist in the 3:2 win over Başakşehir.

Hutchinson’s assist was on a goal scored by Cyle Larin, who has also been excellent for Beşiktaş with three goals in the last four matches. Also of note from the month of November in Europe, Milan Borjan kept Red Star Belgrade at the top of the Serbian table with four-straight wins while Jonathan David became the first Canadian to score in France’s Ligue 1 with Lille OSC. In Scotland, Scott Arfield scored another two goals as Rangers FC continue their unbeaten streak at the top of the Scottish Premiership table.

Looking ahead to December, both Paris Saint-Germain FC (Lawrence and Jordyn Huitema) and Olympique Lyonnais (Kadeisha Buchanan) will begin their 2020-21 UEFA Women’s Champions League campaigns. Other Canadians in the round are Beckie, Jessie Fleming (Chelsea FC) and Cloé Lacasse (Benfica). In the Round of 32 that starts 9 December, Olympique Lyonnais will face Juventus of Italy, Chelsea FC of England will face Benfica of Portugal, Manchester City FC will face IFK Göteborg of Sweden, and Paris Saint-Germain will face Górnik Łęczn of Poland.

In North America, the MLS Cup Playoffs started in November and continue through December. In the East, both New England Revolution (Tajon Buchanan) and Columbus Crew SC (Jordan Hamilton) have reached the Conference Final. In the West, Minnesota United FC (goalkeeper Dayne St. Clair) will face Sporting Kansas City in the Conference Semi-finals. Both Conference Finals will be played on Sunday 6 December after which the MLS Cup Final will be played on Saturday 12 December.

In Concacaf League, Forge FC Hamilton continue their run with a Quarter-finals match against Arcahaie FC on Tuesday 1 December. The winner of the match will qualify to Concacaf Champions League while the loser will advance to a play-in match for a second chance to qualify for the confederation’s pinnacle championship.